During the series, an array of terms are being frequently used. For example, the term Anti-Racist itself is meant to distinguish between people who participate in a system that discriminates against or devalues people of color, i.e. “racism”, and those who actively work to dismantle it (anti-racists). Simply “not being racist” may indicate that you are not actively participating in the system, but also that you are doing nothing to work to dismantle it. Some terms spark debate, others help define ways anti-racist leaders can instill a greater sense of inclusion and belonging at work. Here are definitions of some of the key terms we are hearing during the series and what they mean for leaders today:

The term “ally” is one that many people are unsure of or uncomfortable with. It is important for members of the white group to remember that being an “ally” is a title that should be bestowed upon you by other groups. Allyship itself is a lifelong process of growth, activism, and advocacy by members of any group to support a group outside of themselves. It is most often used to apply to a member or members of the “ingroup” to advance racial equity for members of the marginalized group, although it can also apply to members of marginalized groups supporting each other, or even, at times, supporting members of dominant groups. True allyship implies mutuality and partnership. Actions and consistency are at the core of being an “ally.”

BIPOC is an acronym that stands for Black, indigenous and people of color. The phrase has grown both in use and controversy since righteous unrest spread across the United States this year. Some feel that the term is problematic and lumps racialized groups under one blanket term, allowing white people to ignore non-white cultural identities. Others find it effective in creating a sense of solidarity among groups impacted by systemic racism. Essentially, the term covers all groups who endure discrimination based on race and are not considered “white.” A good rule of thumb is to feel comfortable with asking people how they choose to self-identify in terms of their ethnicity, gender, sexual orientation, or other categorization, and adhere to their preferences.

People don’t speak the same way with their spouse as they would with their boss. A Bostonian may mask their accent when on a business trip to New York. The same is often true for members of different racial groups. People may speak one way with our Black families using an entire dual language for the sake of establishing belonging. It can be a way of communicating that they are in a safe space. There is a whole language to code-speak. The language often ends up in advertisements to try to appeal to a certain demographic and is often misappropriated. Code-switching can be used to emphasize a point or to establish belonging. For anti-racist leaders, understanding and embracing code-switching can help foster cultures of inclusion and belonging.

When people are discriminated against over an extended period of time, they often internalize the stereotypes, adopting the toxic views of the oppressing group. For anti-racist leaders, the responsibility is to work actively to identify places where stereotypes and negative unconscious bias show up, both externally and within. Anti-racist leaders watch for and proactively address negative stereotypes when they arise, in doing so, leaders can foster an organizational culture that enables inner healing from internalized oppression.

This refers to overlapping social identities such as race, gender, sexuality, and class that contribute to the specific types of systemic oppression and discrimination experienced by an individual. A person who self-identifies as “Black,” and “queer,” has a distinct experience of systemic inequality that is different from someone who identifies as “African,” and “heterosexual.” Intersectionality can be a helpful framework for identifying the overlapping prejudices that people face based on how they identify. Many people exist beyond the binary categories they are assigned at birth or by society. The best practice is to acknowledge and celebrate differences while avoiding assumptions and generalizations about others.

Microaggressions (sometimes also called “micro-inequities” or “micro-triggers” among other names) are painful, pervasive instances of behaviors that demonstrate racial stereotyping and implicit bias. The classic example of this would be a white woman clutching her purse when a Black man enters an elevator. But microaggressions often show up in more subtle ways that are no less damaging. For example, they can show up in things like office seating arrangements. Microaggressions can happen casually and are not intended to cause harm. Saying things like, “you don’t sound Black,” can be intended as a compliment but is a highly offensive statement. So how can people avoid them? Micro-behaviors can also be demonstrated as “micro-advantages,” when a subtle behavior gives an advantage to one person or group of people to the detriment of others. (e.g. Inviting some people to lunch with the “boss” but not others). First, seek to build trust with other groups – and don’t be defensive if someone tells you they are offended or feel slighted.

This term is another that is out of widely accepted use. It is problematic because the context in which it is used is blurry. For example, if looking through a global lens, Muslim people are by no means “minorities.” Many people find the word, “minority,” deeply insulting because they believe it assumes cultural inferiority for non-whites. It was used in the federal government to try to ensure equality for groups that were less represented. As our country becomes increasingly diverse, and the racial equity movement evolves, it is best to remove the word minority from the collective vocabulary.

Organizational culture refers to the shared set of beliefs and values that define how to behave within an organization. It is the sum of how team members interact. It often acts as a shield to maintain unity and performance within an organization. Organizational culture reflects the norms and behaviors of society as a whole. Anti-racist leaders continually evaluate their organization to make sure that it can truly foster a sense of inclusion and belonging, knowing that diversity itself is not enough to build a high-performing team.

The term “woke” originated in political movements and refers to being actively aware of, and engaged in, issues relating to racial justice as a means of self-preservation. “Performative wokeness,” refers to instances where individuals signal values of “wokeness” as a tool to boost their own self-image without doing the hard work of meaningfully contributing to the movement for racial equity. The journey of an anti-racist leader starts with self-reflection and leads to the un-learning of problematic traits. To be a better anti-racist it is important to be vigilant, and present in the moment, to uncover the ways that implicit bias impacts ourselves and those around us. It is not enough to simply announce or broadcast beliefs.

Race influences how people view and experience the world. The “White Racial Frame” is influenced by the fact that the concept of “whiteness,” was intentionally created in the 1800s as a tool to oppress and control marginalized groups. The White Racial Frame is embedded in our institutions (such as the media) and sends deeply embedded messages that whiteness is associated with virtue, beauty, and wealth. This racial frame was reinforced over the centuries. It is damaging to non-members of the white group on a macro and micro level. For example, members of the white group often use the white racial frame to form a type of “social glue,” that excludes marginalized groups from organizational belonging or personal advancement. BIPOC often have a racial frame that reflects their perspective, based on their own history. To make progress as an anti-racist leader, explore ways to de-center the white racial frame, openly discuss how it may be different from other racial frames, and bring other voices to the forefront.

All humans have unconscious biases and preferences. Filmmaker Issa Rae famously said at the Emmy Awards, “I am rooting for everybody Black.” We are genetically predisposed to favor members of our own group, or often members of the dominant group, even if we are not members of that group. Bias is a survival instinct that exists in the human subconscious. But when that bias results in systemic racism, the consequences are devastating. Negative stereotypes based on race lead to snap judgments because of unconscious bias. It is possible to overcome these inherent traits through self-reflection, study, bridging, and bonding with members of other groups, and being cognizant of ways unconscious bias presents in daily life. Building organizational cultures that encourage open dialogue and constructive feedback as well as working to develop systems that mitigate bias can also play a beneficial role.

The Annie E. Casey Foundation has an outstanding article titled, "Equity vs. Equality and Other Racial Justice Definitions" if you would like to continue to explore terms and definitions.

Howard Ross is a lifelong social justice advocate, the founder of Cook Ross, and the founder of Udarta Consulting, LLC. He is considered one of the world’s seminal thought leaders on identifying and addressing Unconscious Bias. To learn more about Howard you can read his full bio here.

We are continuing our Anti-Racist Leadership Series in 2021 with new 101 and 201 sessions. Registration is now open. 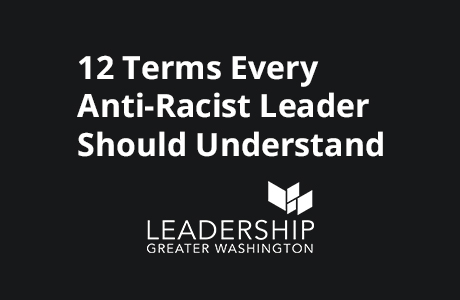