“If someone says something can’t be done, that just motivates Diana to make it happen.” – Rebecca Linder (’16), Founder and CEO, Linder Global Events

The National Cherry Blossom Festival, as we know it today, is one of our region’s most cherished annual events. But it wasn’t always a five-week-long festival that brings in an estimated $150 million per year for DC and attracts 1.5 million attendees from across the globe.

There is something about those Japanese cherry blossoms that evoke inspiration. Over 100 years ago, they inspired a woman named Eliza Scidmore. She was the one who influenced the famous idea to plant the Sakura along the Tidal Basin. First lady Helen Taft happened to like her idea and Yukio Ozaki, Mayor of Tokyo was the man who made the gift of 3,000 cherry trees from Tokyo.

The evolution of the National Cherry Blossom Festival began to accelerate its transformation way back in 2007. It started with a vision, and Executive Director Diana Mayhew (’07), who saw an opportunity with the centennial of the 1912 gift of trees from Tokyo approaching.

Diana understood that preserving and enhancing this legacy was a vital responsibility for the Festival organization and the city. Slated to attend the Festival that year were Helen Taft Manning Hunter, granddaughter of President Taft, who was then 86 years old, and Yukiki Soma, the daughter of Mayor Ozaki who was 95 years old. They came to Washington DC to plant a small grove of cherry trees in honor of the 95th anniversary. “It was truly a moving moment,” recalled Diana, and the realization of the importance of the history of this Festival and what she and her organization were the custodians of, came to a greater light.

2012 would mark the 100th anniversary of the gift of trees. After Diana completed the LGW Signature Program in 2007, she could see a broader vision for the Festival and began to formulate a plan for 2012. She and her staff would use the next four years to plan the Centennial and take the Festival in new directions. It should come as no surprise that Diana marshaled collaboration and mentorship from many dynamic visionaries in her LGW network as she and her staff transformed the event into what we know it as today.

Two of those members are Rebecca Linder (’16) and Lizette Corro (’08). The event was popular at the time, but the leadership team knew they wanted to catapult the Festival into a new dimension. The 100th anniversary was the perfect opportunity.

But that wasn’t going to be easy. The organization itself needed to scale to elevate the event. At the time they only had four staff members. They had a slate of annual funders, but it was time to make a compelling case for increased support. They also had to convince city officials to get the backing they needed to pull off a bigger, bolder event.

That is where then-Mayor Tony Williams (’98) came in. Tony recognized the potential and that the city-wide event and the cherry blossoms were an important asset for the city. Diana and Tony were both active members and their paths had crossed many times through LGW. This connection enabled Diana to have a soft-power approach with DC officials.

“When Tony was the Mayor, he brought on a growth spurt and recognized that the Festival was a positive brand of the city. That recognition was essential,” says Diana.

Rebecca, CEO and Founder of Linder Global Events, served as a creative architect and extension of the Festival team that helped bring it to life. Diana knew they needed Rebecca’s crack events team to not only support the execution of the event but also advise on overarching strategy. McKinsey & Company came on board offering pro-bono support to do a strategic review of the Festival. They analyzed the impact, staffing, and budgets of other high-profile events such as the Kentucky Derby and Tournament of the Roses to help make a case for support for the National Cherry Blossom Festival that proved it to be as impactful of a brand as other major events around the country.

To make the Festival shine, they hatched ideas for new and iconic events and programs, that would take the Festival to the next level. The city was in bloom igniting the region in pink and Blossoms. 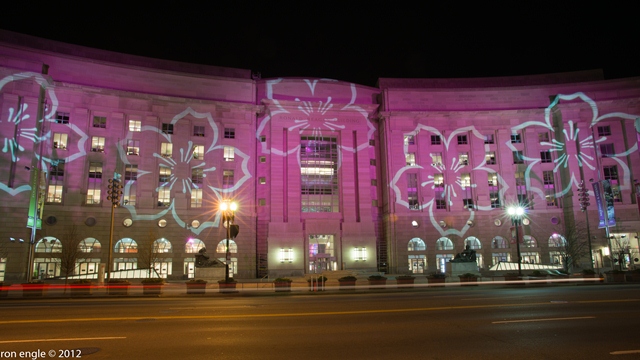 “Rebecca was always the person I would come to with crazy ideas. She never thought they were crazy. Her creative energy, positivity, and everything about who she is have inspired my confidence,” says Diana. But first, they had to pitch all of these the idea to all of the key stakeholders. The morning of the event they brought in Rebecca to do the presentation about bringing Linder Global Events onboard to support Festival efforts.

“Rebecca is a powerful woman behind a pair of jeans and a tailored shirt. But that morning she came dressed to perfection; the dress, the jewelry. I remember one of the team members at the time saying, ‘are you sure we can afford this?” Through Rebecca’s presentation, it was evident that the investments they made would grow the organization beyond their ambitious goals.

Rebecca was the go-to executive on the creative side. But Diana still had the business growth aspect to figure out. Diana looked to Lizette for advice in this area. Diana and the team launched a series of annual events with chefs like Art Smith and Charlie Palmer, elevating their Pink-Tie Party fundraiser. The fundraiser would gather the Washington elite for pink champagne and blossom-inspired cuisine. It was to be hosted by none other than José Andrés. What more could you ask for?

Lizette assisted Diana in creating an elevated profile and fundraising structure for the Festival to attract higher-level sponsorships which led to securing Japanese pharma-giant Daiichi Sankyo, whose President 100 years earlier had funded the gift of the trees. Daiichi Sankyo knew their history. They became the financial key that would scale the organization through the Centennial Celebration. The timing was incredible, reaching a milestone that allowed the Festival and the organization itself to reach unseen heights. But that’s just a small part of the story. Diana and team formed powerful partnerships with organizations like the National Geographic Society to publish a coffee-table book, WETA to create a documentary, ABC7 to take the parade to new heights. Diana and team deepened relationships with longstanding partners such as EventsDC and the National Park Service. The Festival brings our entire community together for a greater purpose.

Lizette’s vision came to life, “What I developed with both Diana and Rebecca was a platform of trust. The way we worked together was developed through our experiences with LGW and our Mindtrusts. We knew it was okay to be vulnerable together and talk through things we were not confident in. The LGW experience was an awakening that changed something in all of us,” says Lizette.

Diana, Rebecca, and Lizette were in-tune because of their shared experience with LGW. But there are dozens of LGW leaders who combined forces with Diana to drive The National Cherry Blossom Festival to new levels.

Lidia Soto-Harmon (’07) connected Diana with the Girl Scouts, who were also celebrating their 100-anniversary in 2012, and they put together an entire partnership campaign complete with a custom National Cherry Blossom Scout patch. Tony Cancelosi (’07) brought his sharp business acumen and strategic direction to the table as a member of the Festival’s board. Julie Rosenthal (’02) was Diana’s go-to person for all things communication and marketing. Diana leveraged each relationship built through LGW.

For most members, LGW is like being a part of a family. You share positive things and work together to resolve challenges. LGW members became a source of inspiration for Diana and her team as they blew away every expectation for the Festival.

And it was because of LGW that Lizette decided to join The National Cherry Blossom Festival Board of Directors. Rebecca joined the LGW Class of 2016 after much-encouraging from Diana. It expanded her view of the region and opened countless doors.

Even with this spring’s event happening in a hybrid way, by way of virtual and personal experiences, without large gatherings, Diana remains determined and ceaselessly optimistic. The Festival plays a key role in DC’s economic recovery. “This is a very interesting time for us to manage funding in a time when a lot of our sponsors are struggling, so we are getting insight into new potential funders and re-positioning. I am excited about new opportunities the future will bring.”

The DowntownDC BID, led by President and CEO Neil Albert (’13), are longtime partners on the Festival. “My predecessor Richard Bradley currently chairs the board of the National Cherry Blossom Festival and he first took it on as a program of the BID twenty-something years ago. Since then, the Festival has become one of the signature events and activities that the BID is associated with.”

The Downtown DC BID partners with the Festival on a number of events they put on and provides office space support, free of cost. Since they are in the same office space, they are able to collaborate and share resources. The Festival helps the mission of the BID and raises the visibility of the downtown business community.

“Diana Mayhew is one of the most incredibly ingenious persons you will ever find, she will find a way to make sure the festival's goals and objectives are met this year even though we might not have a parade. She is working with our team to promote the event in the creative space. I know they will make sure the presence of the festival is felt again this year.”

With her LGW crew in her corner supporting the Festival staff, they will prevail through these trying times. Whether virtually or ultimately in person, let’s all attend and celebrate these remarkable LGW leaders, and our vibrant community, under the Sakura. 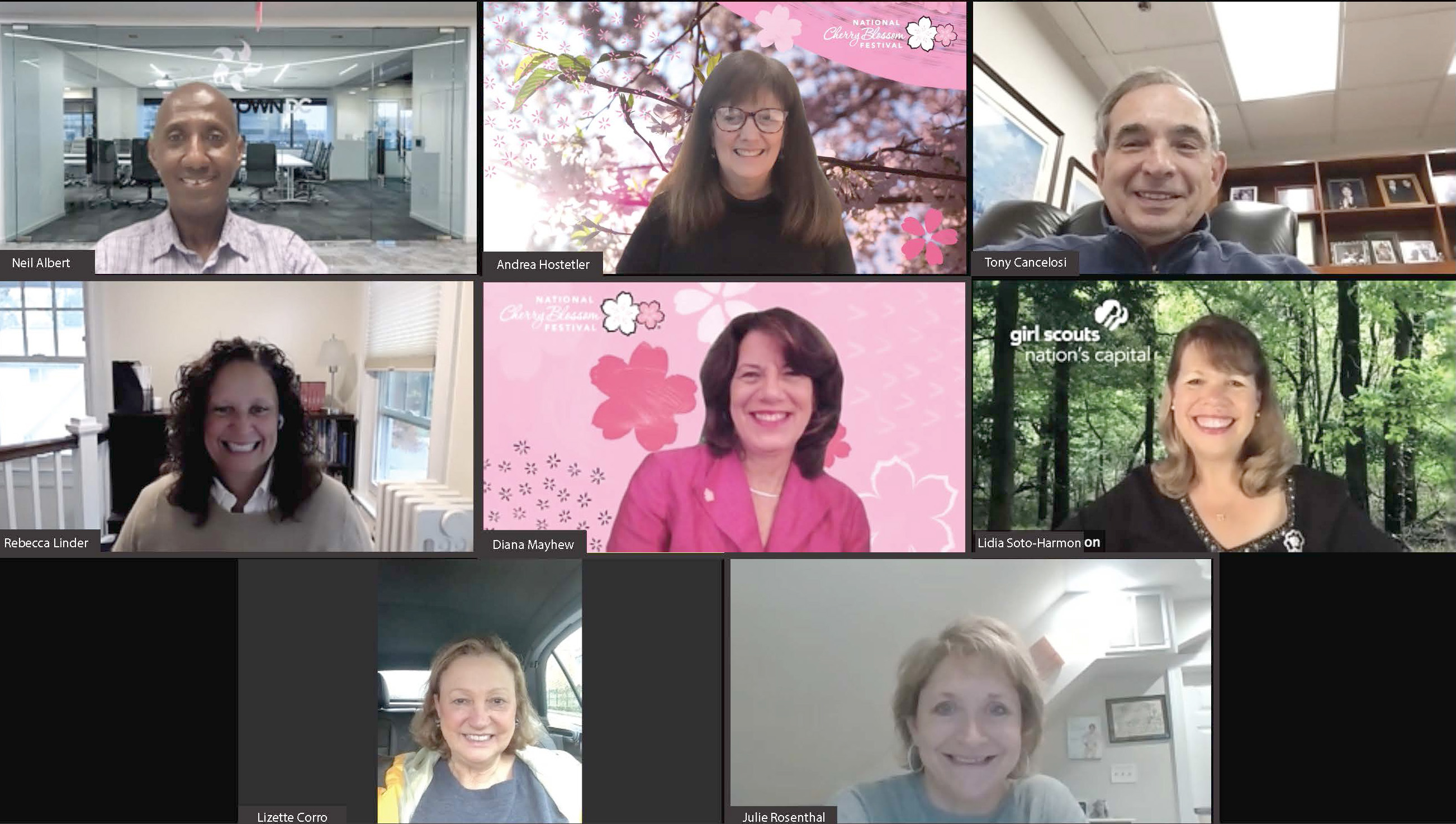