Confronting the Past: Recalibration and Reparations in Washington, DC

On November 10 we visited Ivy City and the Washington National Cathedral for the third and final leg of our DMV Bridge Journey. While previous trips focused and Revealing and Reflecting, this journey focused on recalibrating attitudes towards racial justice and healing.

Inequity is often about exclusion. Driving down DC’s New York Ave, a major thoroughfare leading in and out of the city, one would be forgiven for not knowing that Ivy City, as a neighborhood, even exists. In the past several years a development boom has happened on this stretch of the busy corridor. Luxury condos, restaurants and breweries, a Target store and an organic grocery – it has all the hallmarks of gentrification. What you won’t see, though, is the people who call this enclave home. 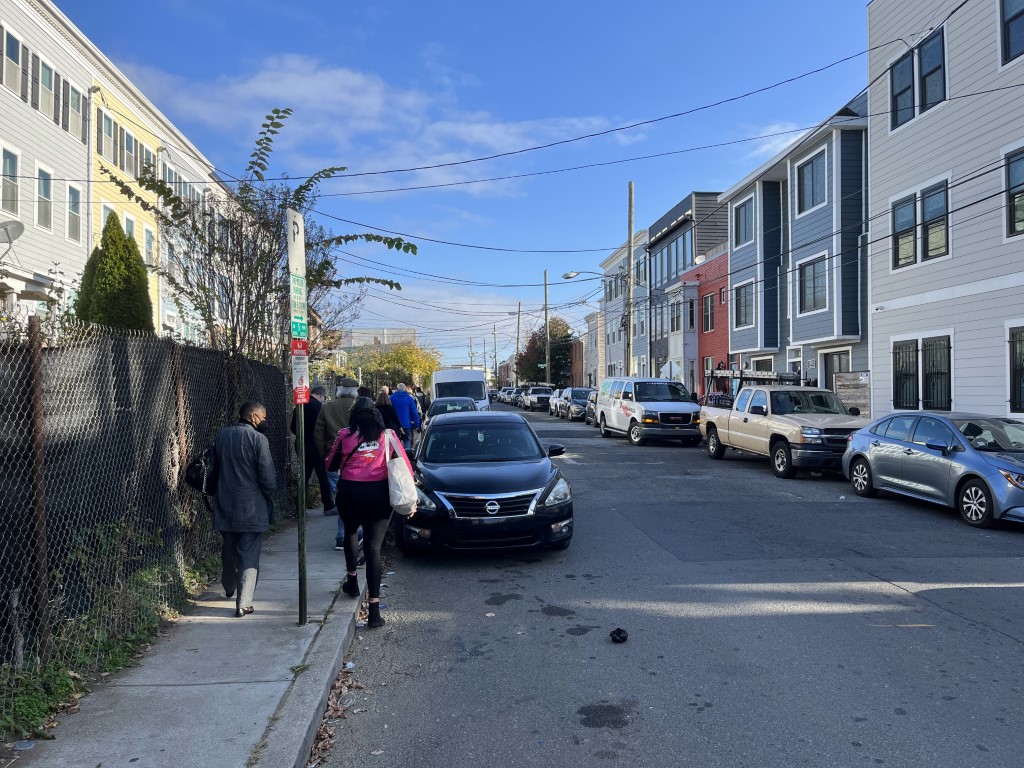 What you also won’t see is what the city doesn’t want you to see. Among the homes that have existed for generations and a school that was shuttered in 1978, is an abundance of industrial land, tucked away in a corner of DC. And it’s hard not to see this over-concentration as unintentional – the neighborhood has a long history of neglect and misuse by the city government. At first glance the presence of these industrial zones is an obvious visual blight, but there are even more pernicious, unseen implications.

Maps of the neighborhood show the real story. There is, of course, the concentration of industry, far outpacing most of surrounding area, but there’s also the lack of trees and green space that have a direct impact on the health of residents. In DC there’s a 16.5 degree temperature differential between the warmest and coolest areas, with urban heat islands comprising the higher end of the spectrum. And Ivy City is one of those islands, with temperatures registering 10-20 degrees hotter than other communities. This isn’t just a lack of views and parks, it’s environmental injustice.

Despite this encroachment by the city and developers, there are people who are fighting back, people who have been fighting back. Ivy City is one of the most historic Black communities in DC, founded 150 years ago in 1872, and the community organized early. In 1891 Trinity Baptist Church was founded – the Ivy City Citizens association followed soon after in 1911 - and it was in the church’s present-day location where our group met with Parisa Norouzi and Sebrena Rhodes of Empower DC, a grassroots advocacy organization focused on the self-advocacy of low and middle-income residents. 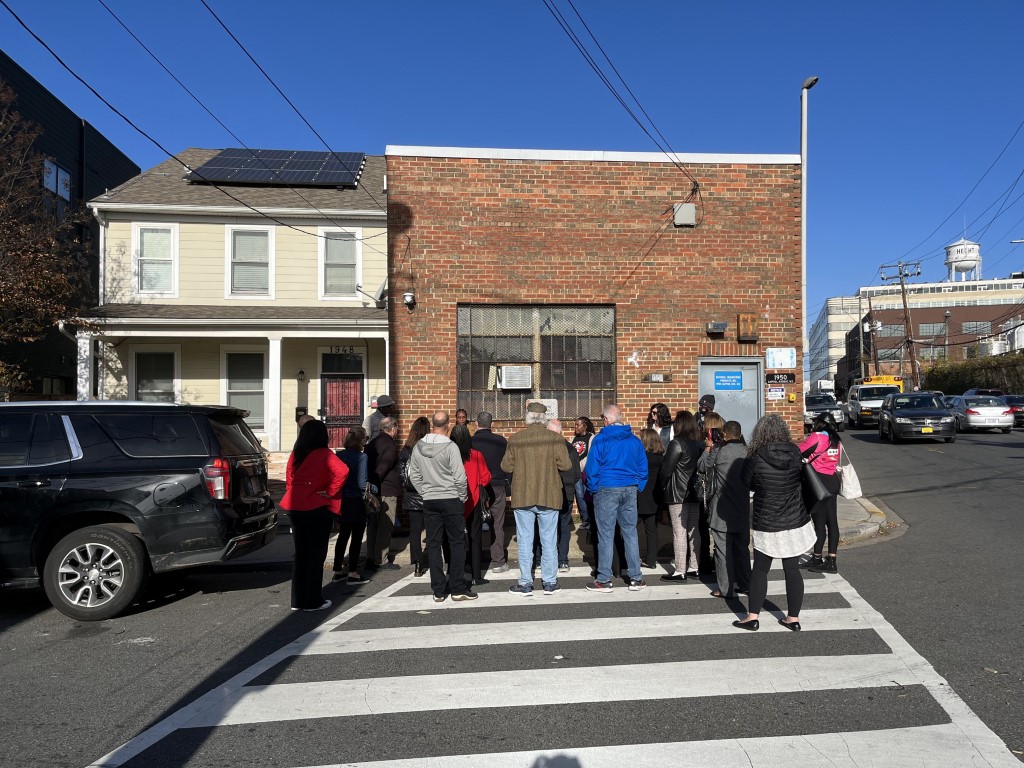 We learned from them about the history of the neighborhood’s working-class Black community fighting against environmental injustice – lack of infrastructure, industrial zone expansion, a proposed freeway, illegal dumping, the list is seemingly endless – and the battles that are still taking place today. Down the street from the Trinity Baptist Church is the National Engineering Products chemical facility. It’s a squat brick building on a street full of residential houses, but you smell it before you see it, a chemical odor that fills the air and permeates the interiors of neighboring homes. The building has been there since the 1930s, grandfathered out of air protections instituted by the DC Department of Environment and Energy. Empower DC has been fighting alongside residents to get the plant shut down, one of the primary items on their action agenda. 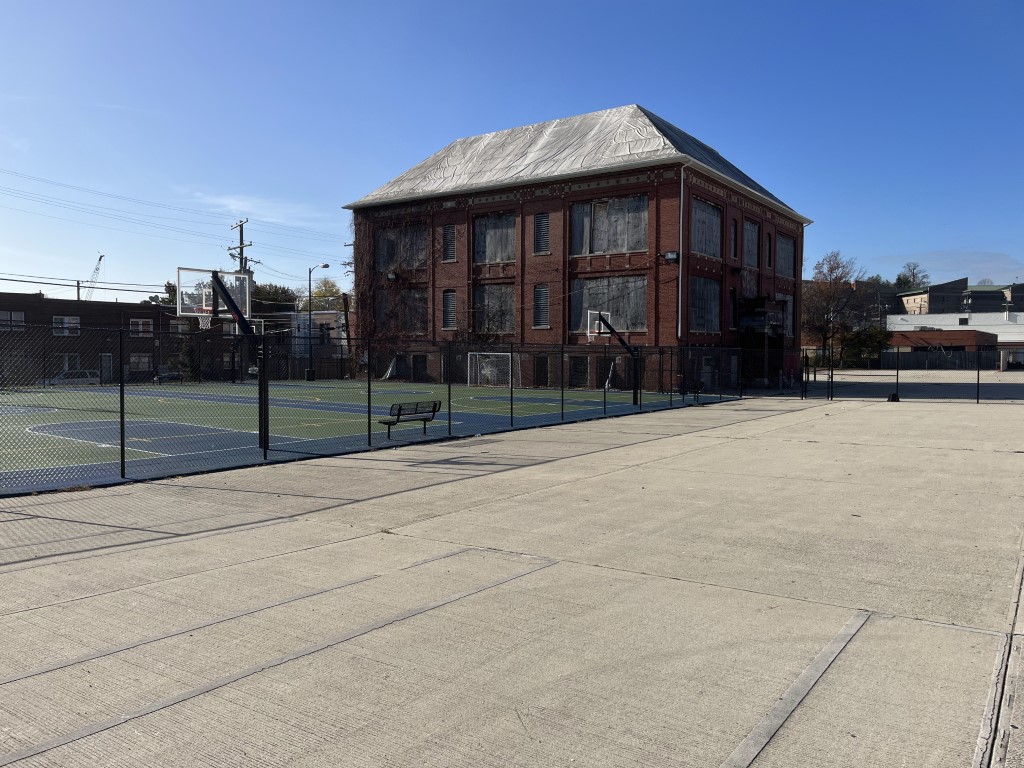 Another item: a new community center and public park on the grounds of the Crummell School. Opened in 1911, the school sits long-abandoned, a relic of a time when education was more accessible for the neighborhood. The lot on which it sits, filling almost two city blocks, holds a basketball court and a small playground. It’s something, at least, in a neighborhood lacking in recreational opportunities, but the residents and Empower DC see the potential in the site. They’ve been advocating for more facilities for Ivy City’s young people, spaces not just to keep them off the street but for uninterrupted learning and workforce development. The city has allocated $20 million for the site, but it’s clear to most everyone that more is needed to realize the goal. Meanwhile a youth detention center perches on a hillside just beyond. 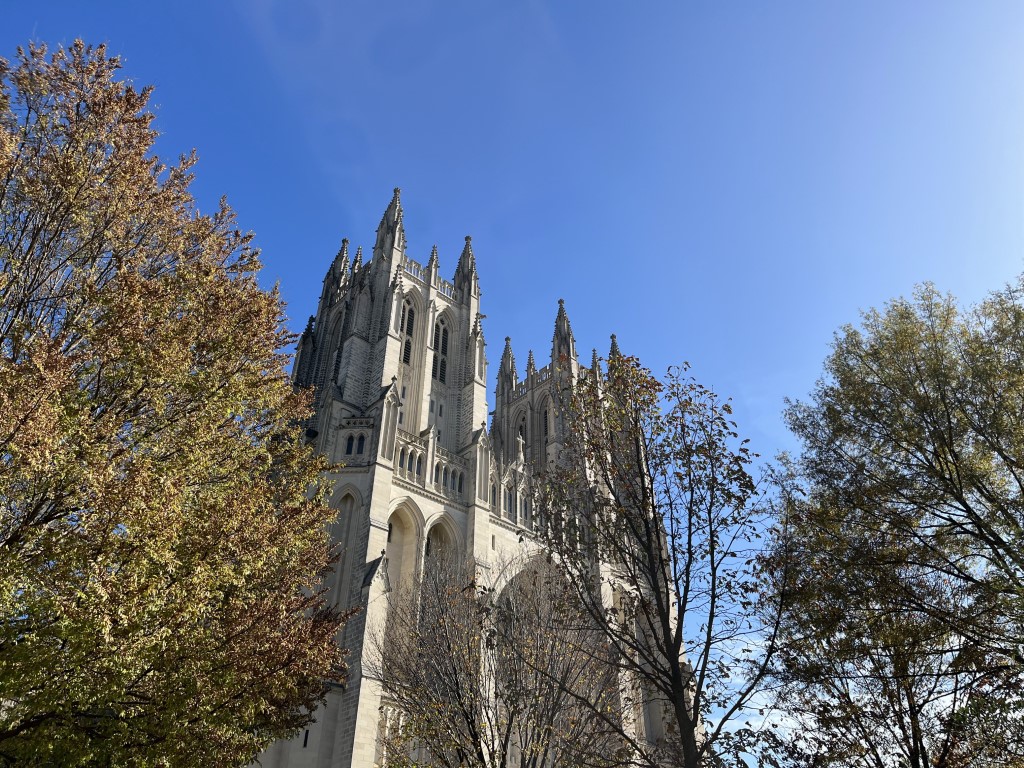 The Washington National Cathedral is worlds away from Ivy City. It’s a grand building, towering over one of DC’s wealthiest neighborhoods. The building has a racial history of its own – it was only recently that two stained glass windows depicting Robert E. Lee and Stonewall Jackson were removed, to be replaced in 2023 with designs by Black artist Kerry James Marshall – but this history wasn’t the main reason we were there. Like these windows, and like the monuments in Richmond and elsewhere across the country, white supremacy and Black exclusion have left a scar, some visible, but many more that run deep, unseen but with far-reaching implications on the lives of its people. 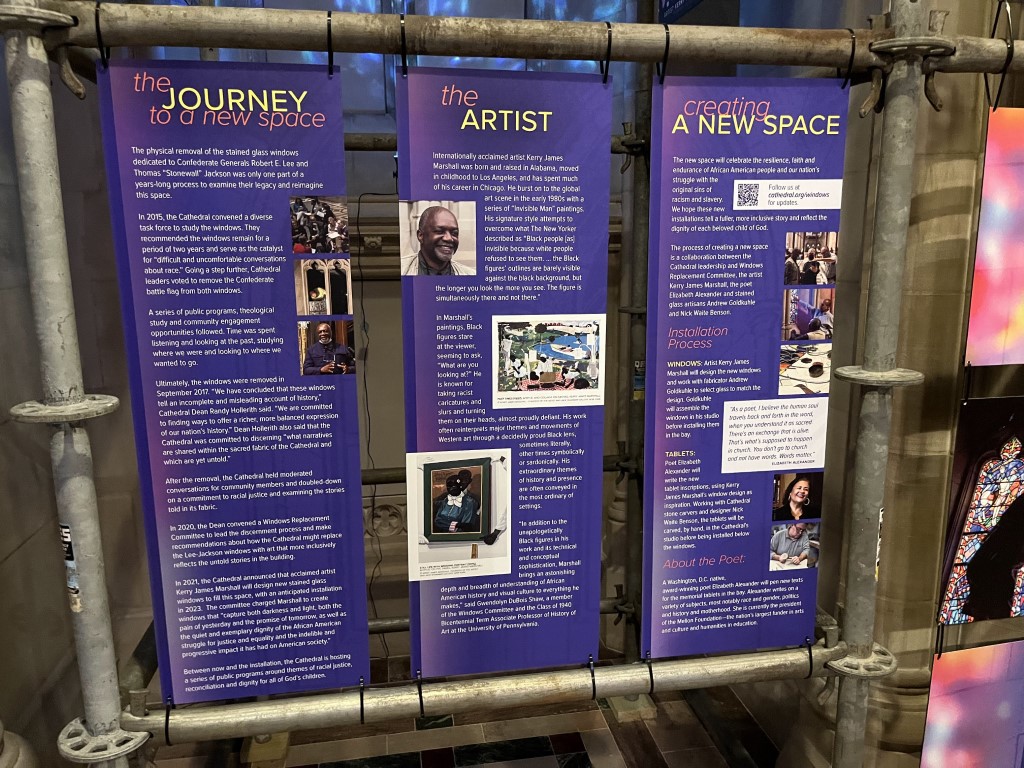 So how can we begin to heal those scars? Removing statues and icons is one thing, but how do we reverse decades, centuries, of the heinous treatment of an entire race? How can we repair the damage? It was reparations that brought us to the Cathedral, for a panel with educators and activists intimately familiar with the subject: Dr. Raymond Winbush, Director and Research Professor at the Institute for Urban Research at Morgan State; Justin Hansford, Professor of Law and Executive Director of the Thurgood Marshall Civil Rights Center at Howard University; and Adjoa Aiyetoro, Lawyer and Civic Activist who was on the legal team fighting for reparations after Georgetown University’s slaveholding past was revealed. The Rev. Canon Leonard Hamlin, Canon Missioner and Minister of Equity and Inclusion, and our guide throughout our time at the Cathedral, moderated and facilitated the conversations.

Reparations have a long history in America. After the Civil War General William Sherman signed an order allocating 400,000 acres of confiscated Confederate land to Black families, the infamous 40 acres and a mule. However, after President Lincoln’s assassination, Andrew Johnson reversed that order and the land returned to the enslavers. In Washington, DC, slavers were paid reparations for their lost property: the enslaved people themselves. Since that time reparations have been made to other groups – Native Americans received land and billions in programs and benefits for the forced removal from their land, and the US paid $1.5 billion to interned Japanese-Americans and their families.  But after the revocation of Sherman’s order no state-sanctioned attempts have been made to atone for the sins of slavery and white supremacy. 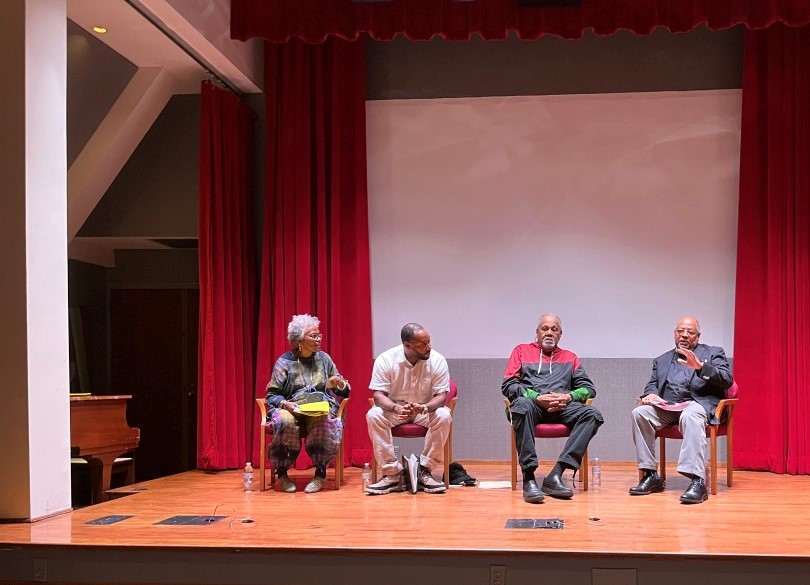 Some inroads have been made. Cities such as Evanston, IL; Providence, RI; and Detroit, MI have established task forces and begun implementing policies to begin the reparations process. After it was revealed that the Jesuit order that ran Georgetown University in the 18th century both held and sold enslaved people – sales that would pull the university out of impending bankruptcy – the university renamed several campus buildings to reflect this past and began offering preferential admission to descendants. These symbolic gestures, however, amount to little compensation for the unpaid labor of the enslaved. In October 2021 a DC City Council bill created a task force to study reparations in our nation’s capital with the aim of producing results in 2023. Reparations is a slow process, often met with resistance and empty gestures, but more localities and institutions are seeing the necessity. We missed our chance the first time. Making that same mistake again is inexcusable.

That was the overarching theme of the three legs of our DMV Bridge Journey, but it’s an equally accurate summation of our day in DC. The hidden past of an oft-ignored DC community was revealed; we reflected on what that past meant for the present; and how our present can be recalibrated to address and begin to repair the systemic mistreatment and exclusion of Black people in America. This journey was not a solution, and it wasn’t an action. It was an opportunity to see our role in moving forward, to take action in working towards a solution. There was no easy answer in all of this, but there are steps we can take in our own lives to fight for racial justice. And these steps are part of a much larger journey, one that started centuries ago, but that’s also just beginning today. 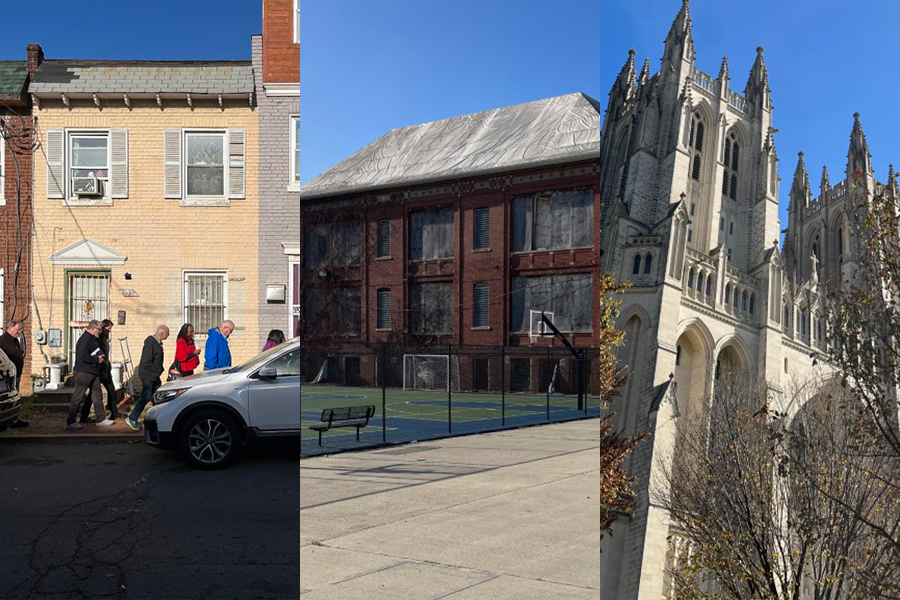