Day 1: Reflections On Our First Day In Richmond

On October 26 and 27 LGW visited Richmond, VA for the second leg of our DMV Bridge Journey. While our first trip to the Eastern Shore focused on revealing the past, this journey was geared towards reflecting on how the past impacts the present.

The LGW Bridge Journey group approached Richmond’s Black History Museum & Cultural Center (BHM) via Interstate 64, a long stretch of highway that cuts straight through the city. Before I-64 was built, the neighborhood of Jackson Ward was a thriving center of Black culture and business. But after construction was complete, Jackson Ward found itself bisected, entire communities cut in half by a nearly impenetrable transport artery. It was our first of many reminders of Richmond’s white supremacist past, one that was determined to stifle the growth of Black family, community, and power. And far too often it worked.

BHM, housed in a disused armory building since 1991, celebrates the history and culture that centuries of structural racism strove to suppress. It’s a painful history, but one that allows visitors to learn from the past to fuel a better future. We were met there by Chelsea Higgs-Wise, a local activist and Executive Director of Marijuana Justice who represents that future. And by Rev. Benjamin Campbell, a historian and Episcopal Priest who is well-versed in that past. Higgs-Wise would spend the rest of our two-day journey by our side, but for the next few hours Rev. Campbell would guide us through what he frequently – and accurately – referred to as the “terrorist state” of white supremacist Richmond. From the city’s founding in 1607 to the Civil War to Emancipation to the Civil Rights movements of the 20th century, he painted a vivid picture of a city built on the backs of Black people, and one that was determined to strip them of every right and dignity they had as citizens. It was a stirring, evocative, and infuriating history, one that would be echoed in site visits soon after.

Liverpool, England; Benin, West Africa; and Richmond, Virginia are home to three identical monuments. Called the Reconciliation Statues, they memorialize the British, African, and American slave trade route now identified as the Reconciliation Triangle. Between the 1600s and the American Revolution, over 100,000 Africans were delivered to Virginia via this route, an enterprise that financed major economic development in North America and Britain. It was at Richmond’s Reconciliation Statue, a short walk from the newly built First Street Station, that we began our journey into the city’s Shockoe Bottom neighborhood, and into its white supremacist past.

The remnants of the African Burial Ground abut an empty grass field and a loud, busy exchange for Interstate 95, with little but a marker to indicate its importance as Richmond’s first cemetery for free and enslaved Blacks. Established in 1809 on the site of the city’s criminal gallows – a grim and foreboding placement not missed by those visiting the gravesites – it was the final resting place for many of the Africans who arrived in Virginia via the Emancipation Triangle. But viewing it today bears very few reminders of these enslaved people, their graves and memorials washed away with time or buried with infill. It’s a reoccurring theme on this first part of the trip, the erasure of Black memory and legacy. A contemporary message on a nearby wall speaks to this: “they tried to bury us but they didn’t know we are seeds”.

On our walk from the Emancipation Statue to the African Burial Ground we passed another unassuming site, recognized with historical markers and little else. From Rev. Campbell we learned it was once the site of Lumpkins Jail, a notorious spot befitting its Devil’s Half-Acre moniker. By the mid-1840s the trading of human chattel from Africa had been outlawed, but the domestic trade of enslaved people still flourished in America, and in Richmond the center of that trade was Lumpkin's Jail. Named for Thomas Lumpkin, the city’s largest slave trader at the time, it was a complex of residences, holding pens, and auction floors, none of which remains today short of a cobblestone floor uncovered in an archaeological survey of the site. It would later be the land on which was founded the college that became Virginia Union University (now in a different part of the city), after being sold to a Baptist minister by Mary Lumpkin, a woman enslaved by Lumpkin who he would later marry. Currently a plan is being developed to recognize the people victimized at the jail, and memorialized at the African Burial Ground, with a museum and cultural center examining the history of the sites.

High above and seemingly far-removed from the tainted past of Shockoe Bottom lies Richmond Hill. It’s a peaceful place, home to a cloistered order of nuns for nearly a century, and adjoins the Adams-Taylor House, built in the 1780s on the crest of the same-named hill overlooking the city. After the Civil War and Emancipation the house was sold to the Catholic Bishop, paving the way for its eventual use as a place of study and spiritual contemplation. The scars of its past threatened to be forever hidden, but when Pam Smith joined the community in 2019, she was determined to illuminate the history of the site. And so the Judy Project was born.

Named for a woman enslaved at the Adams-Taylor House from 1860-1865, the Judy Project has one simple goal: to tell the stories of the enslaved and free Black people who lived and worked on the site from the 1780s to 1980. Through archival research, interviews, and archaeology, the project has began to unearth those lives and labors, to give name to the forgotten people upon whose back the center was built. And while much of the project is one of recorded of histories and genealogy, the physical past has not entirely vanished. After the site’s long-time gardener reported uncovering artifacts near a dilapidated garden toolshed, Smith brought in an archaeological team to investigate. Co-led by Tim Roberts from Cultural Resource Analysts, who spoke to our group from his active worksite several feet below where we stood, they were able to determine its original purpose: quarters used to house enslaved people on the site.

Smith also shared with us a story about Judy, who was nearly 90 years old when she was first brought to the Adams-Taylor House. Mary, a daughter of the house’s occupants, recalled in a letter being carried up to the house’s high porch by Judy to watch “the Bluecoats marching into Richmond” from the hill high above. “Mary,” Judy told her, “always remember that you saw history in the making when you were four years old.” At Richmond Hill, through the work of Pam Hill and the Judy Project, that history is still being made, and new stories are continuing to be told.

Brown’s Island is a Richmond favorite, an artificial strip of land in the James River home to numerous outdoor events, concerts, and recreation. It’s also home to the Emancipation and Freedom Monument, which awed our group as we crossed the footbridge onto the island. A 12-foot sculpture installed in 2021 after preliminary work began in 2011, it features two bronze figures of emancipated people. The male figure casts of chains and bares a back scarred with whip lacerations, the woman holds an infant and a sheet of paper bearing the date January 1, 1863, when President Abraham Lincoln issued the Emancipation Proclamation; down below are etched the visages of ten Blacks who fought for Civil Rights before and after Emancipation. It proudly rises, forms towering and twisted, from its peaceful setting. Just two weeks prior to its installation the statue of Robert E. Lee had been removed from Monument Avenue.

From the monument we were led by historian and author Elvatrice Belsches back to Jackson Ward to learn more of its history as a center of Black business and culture. A home to free and enslaved Black people before the Civil War, it was after Emancipation that Jackson Ward truly became an enclave for Richmond’s Black residents. It came to be known as “America’s Black Wall Street”, populated not just by residents but by businesspeople and entrepreneurs seizing the reigns of the economic success and prosperity that they had been so actively – and violently – and denied. Chief among them were John Mitchell Jr., editor of the Richmond Planet, one of several African-American newspapers being published in the city, and Maggie Walker, the first woman to charter and serve as president of an American bank; Walker’s bank was the St. Luke Penny Savings Bank, one of six Black banks operating in the city at the time.

Maggie Walker’s home still stands in Jackson Ward today, now a historic site operated by the National Parks Service. Outside the grand Italianate house our group learned of Walker’s influence not just as a businessperson but as a crusader for racial justice, women’s rights, and economic empowerment. While her achievements made her one of Jackson Ward’s most prominent success stories, she was but one of many who rose up out of beginnings stifled by white supremacy; the street on which we stood, home to so many of these people, is called East Leigh but came to be known as Quality Row for the prosperity to which it was home. This prosperity would unfortunately not last, subject to urban “renewal” projects – such as the aforementioned I-64 – that would literally and figuratively tear Jackson Ward apart.

Our journey to Richmond was one based on reflection, on taking what was learned from the past and interpreting what it means for the present. So much of our first day was necessarily rooted in this past, but it was time to move forward. And at Richmond’s Firehouse 15, we began our journey into the present. Over dinner we were joined by a panel of local activists – Robert Alan IV and Valerie Slater of RISE for Youth; social worker and social outreach activist Tangee Augustin; Ashley Shapiro of Justice Forward Virginia; and Ariane Crosby of UGRC – moderated by Chelsea Higgs-Wise. It was there that our group learned not only of Marcus David-Peters, whose 2018 murder by police catalyzed a racial justice movement across the city, but of the other critical issues facing the city’s Black residents.

It was an all-too familiar tale, one in which governments used intimidation tactics, violence, and incarceration to create and maintain instability in Black families, to prolong generational trauma, stifle generational wealth, and create an environment in which Black power and prosperity is threatened at every opportunity. From the panel we heard stories of pain, anger, and hope. And it was made clear to us the real reason we were here, not just to learn about Black History but also Black Action, the people on the ground fighting to ensure that these cycles of oppression and systemic racism were broken. Richmond to many seemed a world away from the DC region, but the progressive spirit that fuels the fights in our region seemed almost stronger there, perhaps necessarily so. And we would learn more about that spirit, their fight, on the second day of our journey. 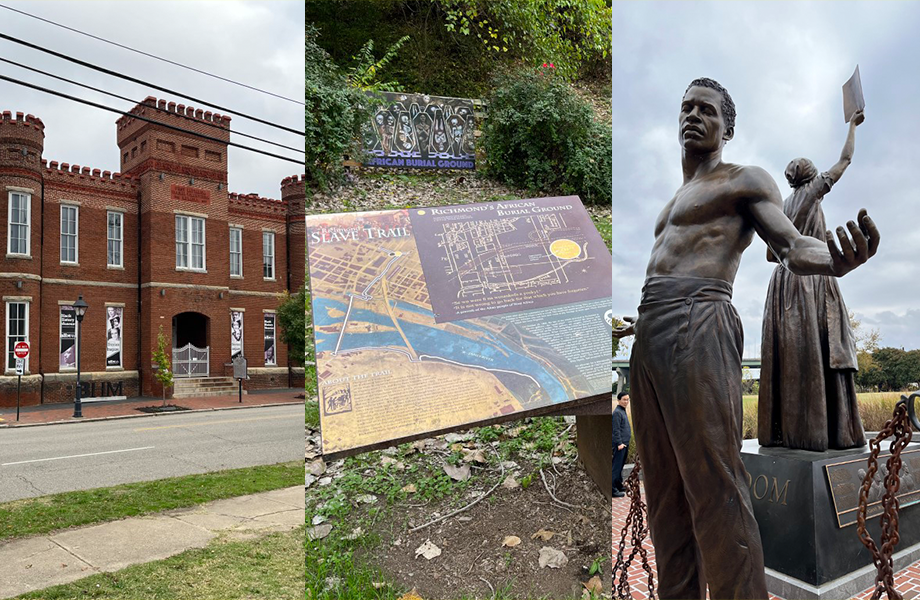