On October 26 and 27 LGW visited Richmond, VA for the second leg of our DMV Bridge Journey. While our first trip to the Eastern Shore focused on revealing the past, this journey was geared towards reflecting on how the past impacts the present.

Driving down Richmond’s Monument Avenue today, one might be a bit confused. It’s a grand thoroughfare, lined with stately homes and churches and bisected by a grassy, tree-shaded promenade. All the pieces are there to befit a boulevard in the tradition of great global cities, and it’s one of the crown jewels of the city. But wait a minute, where are the monuments?

If you travel far enough up Monument Avenue you will eventually encounter one. In 1996 the city erected a memorial to tennis star and Richmond native Arthur Ashe, who had passed away from AIDS-related pneumonia three years prior. At this time though he would not have been alone. Five more statues dotted the route as it led downtown, all honoring men who had fought for the Confederacy in the Civil War, statues that had originally given Monument Avenue its name. And statues that, since the racial unrest following the murder of George Floyd in 2020, had been forcefully removed, either by protestors – as was Jefferson Davis, the first to be taken down – or through government intervention.

For the years prior to the 2020 protests and racial justice reckoning, though, the boulevard was a grand memorial to the Confederacy, a miles-long tribute to men who had fought for white supremacy. When the artist Kehinde Wiley visited Richmond for his 2016 show A New Republic at the Virginia Museum of Fine Arts (VMFA) this is what he saw. As a Black man, the murderer’s row of Lost Cause celebre was horrifying; but as an artist, it was inspiring. And so Rumors of War was born.

The LGW Bridge Journey group could hardly miss it upon pulling in to the VMFA’s circular drive. A 27-foot bronze equestrian sculpture towers over the viewer, not dissimilar at all from those Monument Avenue namesakes. In fact it takes its inspiration directly from the statue of Confederate general J. E. B. Stewart, one of three that was ordered removed by Richmond mayor Levar Stoney in July of 2020. Here is the horse atop a grand stone pedestal, its rider proud, gazing off into the distance at some unknown point. But here the rider is Black, the Confederate garb switched out for a hoodie and jeans, the hat now dreadlocks. It’s no longer a memorial to a cause “lost”, but to the young Black lives lost to social and political violence. It’s a memorial worthy to its monument.

Valerie Cassel Oliver, Curator of Modern and Contemporary Art at the VMFA, is proud of this monumental work of art, as one would naturally be. She shared with the group that it was part of the team that, along with Wiley’s insistence, ensured that “Rumors of War” made its eventual home here, in a setting that evokes how one might have viewed those that once lined Monument Avenue. And she helped usher in unanimous board approval and financing for the statue’s installation on the museum’s front lawn, a place of pride for all passersby to view. And, when asked if she would like to see Wiley’s work on the boulevard that was home once to icons of white supremacy, she scoffs; as satisfying as it may be to see this new hero honored where the disgraced ones had fallen, “Rumors of War” is exactly where it belongs.

Richmond’s monuments would overshadow our second day in the city. Without visiting, and hearing from people on the ground, it’s difficult to grasp how something almost entirely absent could still be so present. And absent they are. After the removal of the Confederate monuments their plinths remained – bronze statues can be toppled, stone pedestals, rooted strongly in the earth, are something else. But in their presence they served as reminders of what once was and what had now been achieved, gathering places and literal signboards for the racial justice movement. They were symbols of success. By February 22, however, almost all of these reminders were gone too, with only the gargantuan edifice that once enshrined Jefferson Davis still standing.

In most cases you wouldn’t even know these statues were ever there, their former sites now marked with a simple garden or fountain. Robert E. Lee’s case is different though. His monument would remain until September of 2021, over a year after the others fell. Until then it served as a focal point of the George Floyd protests, the centerpiece of a movement and a veritable gallery of protest art. The circle on which it stood was unofficially renamed for Marcus David-Peters, the man who was murdered by Richmond police in 2018, and became a gathering place for all walks of life. For those fighting for racial justice, it was a de facto community.

That community is no more. Like its brethren, the circle holds no memory of what was once there. But as our group drove around the circle it was painfully obvious that something had happened there. In contrast to the wide expanses of most of Monument Avenue, offering an unobstructed approach to down, a fence has been erected here, thwarting access to what was once the thriving hub of a movement. Coming from Washington, DC, it’s hard not to recall the fencing that went up around Lafayette Park in 2020, or at the Capitol Building after the attempted coup on January 6. In those cases they ostensibly served to protect the seat of government. Here they seem only to serve as an impediment to the people that once called this circle home. What was once a monument to the Lost Cause is now a memorial to a lost community.

In the absence of monuments, how do we remember? With the once-thought permanent remnants of battles waged are gone, it takes people to keep the memory alive, and to keep the fight for racial justice alive not just in the minds of the people but in the feet on the ground. Under the shadow of the Arthur Ashe monument we met with Art Burton, founder and director of Kinfolk Community Empowerment Center, a grass-roots organization focused on food justice. He’s a reminder of the work that was happening in Richmond long before George Floyd and Marcus David-Peters, and that will continue in the memory of their absence.

And he’s a reminder too that racial justice activism isn’t only marches in the street and toppled statues, it’s building and maintaining a strong network of community support. When you hear Art talk, it seems some of his proudest accomplishments are as activist turned agriculturalist (or vise versa?). He and his organization are responsible for the bounty of public gardens in the city, spaces carved out to provide sustenance for body and spirit. His roots are not just in Richmond’s history of activism but in its literal soil as well, tilling fertile ground for the next generation of leaders.

That next generation will need a voice, and at the Institute for Contemporary Art (ICA) we found some locals who aimed to provide that amplification. There was Chioke I'Anson, NPR correspondent and VCU professor who runs the podcast center at ICA where we next gathered and who began a program to introduce young people to the democratic nature – and far-reaching power – of the medium. There was Zenobia Bey of Community 50/50, whose organization is focused on supporting their community through listening and engagement, broadcasting their calls to action and needs for support. And there was Regina Boone and Sandra Sellars of the Richmond Free Press, a free weekly newspaper which since 1992 has connected with lesser-served communities to deliver news committed to justice and equality. We had the benefit of hearing from people who understood not just the power of speaking, but also the need for someone to listen.

Our last stop in Richmond was at the Neighborhood Resource Center of Greater Fulton, a community center in one of the city’s most impoverished areas. Housed in an old post office building since 2004, the center is focused on education, nutrition, opportunity, and organizing for the surrounding neighborhood. And after all the talk of monuments and memorials, it was a necessary reminder that its communal space that’s most impactful. Art Burton’s community gardens; the once vibrant grass circle rechristened in the name of a man who lost his life to state violence; a podcast studio and a free newspaper – places where people and voices could come together to brandish their collective strength in support of a movement, in support of justice, and in support of each other. While the old monuments were long gone, memory still remained, and there were battles still to be won. 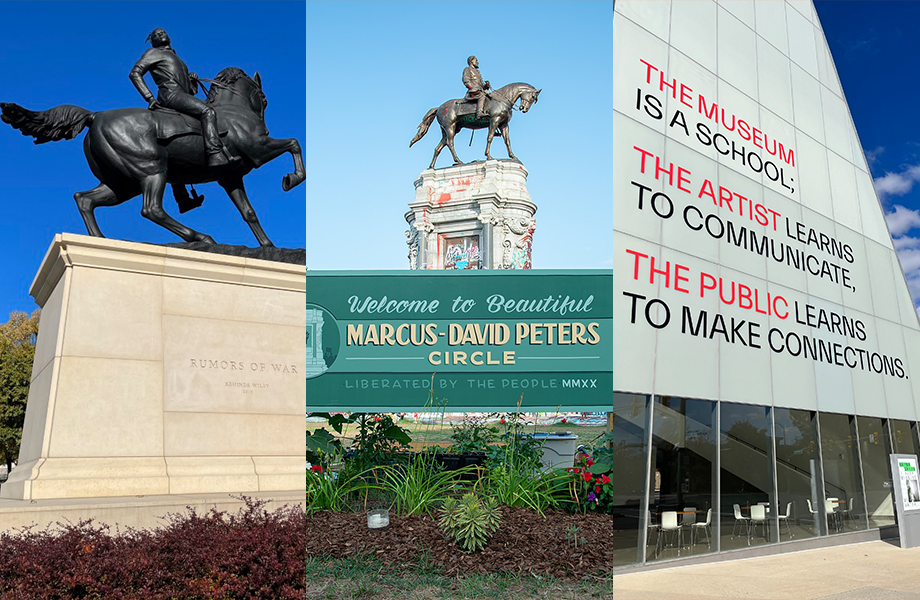