Leadership Greater Washington welcomed Don Graham, longtime leader of The Washington Post and Graham Holdings Companies, as our latest Lessons in Leadership guest for a discussion on leadership topics and the region with Michael Harreld, Regional President of Greater Washington for PNC Bank, our host and sponsor for the event.

Throughout a wide-ranging conversation, Graham offered his unique perspective on the region’s notable civic efforts and accomplishments, reflections on major changes to the media and its role in political discourse, and spoke about the influence of others on his personal leadership journey.

With a career spanning nearly five decades in the region as the head of the Washington Post and Graham Holdings Companies, and as a highly-involved civic leader for the region, Graham painted the picture of a changing region that reflects new challenges for a more diverse and numerous assembly of civic leaders in Greater Washington than what once ruled the region’s civic institutions. While the makeup of the region’s leadership has changed, Graham suggested leadership remains critical to major challenges for the region:

“I think the region will be strong. How strong depends on leadership. How smart are we at addressing our problems? The obvious screaming problem is Metro. As bad as the traffic situation is, if Maryland, Virginia, and DC can’t get together and figure out how to fix the metro system, it’s a gigantic problem.” He continued, “The federal government is not going to bail us out on this one. It is not going to happen. We have to decide that either we want to pay a little more to have a functional metro system, or we just want to sit on I-66 our whole lives.”

Among other topics explored, Graham took our audience on an historical tour of The Washington Post that coalesced into a conversation about the major evolutionary challenges facing traditional journalistic institutions and the idea of objectivity in the press.

“I was well-suited for the newspaper business; I spent my lifetime being confused about political issues…. But now, everybody’s certain about everything. There is this epidemic of certainty.”

“One of the problems with newspapers – not the only problem – has been technology. Newspapers weren’t as smart in adapting to online as technology companies were, obviously.”

Both face the pressures of a discursive environment well suited for individuals to confirm their biases and broadcast those biases to an extraordinarily-wide audience thanks to technology and social media.

“A partisan press started in this town with Adams and Jefferson. Each brought a printer who spread fearless lies about the opposition… and they both hated the other guy’s newspaper. It’s only in the 20th century – to give credit where it’s due, to the New York Times – that the idea came up that newspapers ought to try to give an impartial account of the news.”

Despite the constant presence of partisan press, as well as the origin of The Washington Post in 1877 as the first newspaper in Washington friendly to the then-Democratic Party’s worldview, the rise of inaccurate ‘fake news’ and its impact on civic life concerned Graham after a question was raised if he thought we might be living in a post-truth era:

“No. There have always been a great variety of sources of information in this country and in this city… To some extent, these are new problems. One example was the sophistication of the Russian government. If you lived in Eastern Europe, you would wake up thinking about this problem, because the Russians flood your social media, your airwaves, with very subtle, very sophisticated propaganda that’s working better than propaganda did before.”

In the final theme of our discussion, Graham reflected on the leadership of influential people in his life and other leaders in his orbit, including Warren Buffett and Graham’s parents, Phil and Katharine Graham:

“[Warren Buffett] came on our [The Washington Post Company] board in 1974. I know him really well. I’ve never known him to think an unethical thought. He became the CEO of his current company, Berkshire Hathaway, in 1965. He has been the CEO for 50 years…. He’s amazing. Washington is full of people who are slightly overrated in their reputation. Warren is underrated. He’s even better than his amazing reputation.”

“From the first day to the last, she [Katharine Graham] thought she was totally screwing up the place. She had less self-confidence, she admitted to having less self-confidence than anyone you know, and that’s why her book became and remained quite popular, because unlike most CEO autobiographies… Kay’s book is about how hard it was, and how she suffered as somebody who felt unqualified, and she is one hell of a story. Let me tell you, if anyone tells you a woman cannot run a large company, you send them to that story.”

When asked if he, like his mother, might pen an autobiography to offer a lasting look into his unique perspective, he smiled:

“No. I’m not out of my mind. Kay wrote an extraordinary book. I have had a good life. I’ve enjoyed it. I enjoyed working at the Post… I don’t particularly want to spend the rest of my time reliving it.”

Throughout our dialogue, Graham graciously shared his unparalleled encyclopedic knowledge on the history of the region’s institutions and about its top players and several leaders in attendance, gracefully reflecting on their professional careers, contributions to the region, and sacrifices made in the name of public service to the community.

Altogether, this Lessons in Leadership session was among LGW’s most successful, both in terms of the attendance of LGW members and in the subsequent excitement we heard following the session. Thank you, Mr. Graham, for everything.

Photos from the event are available here. 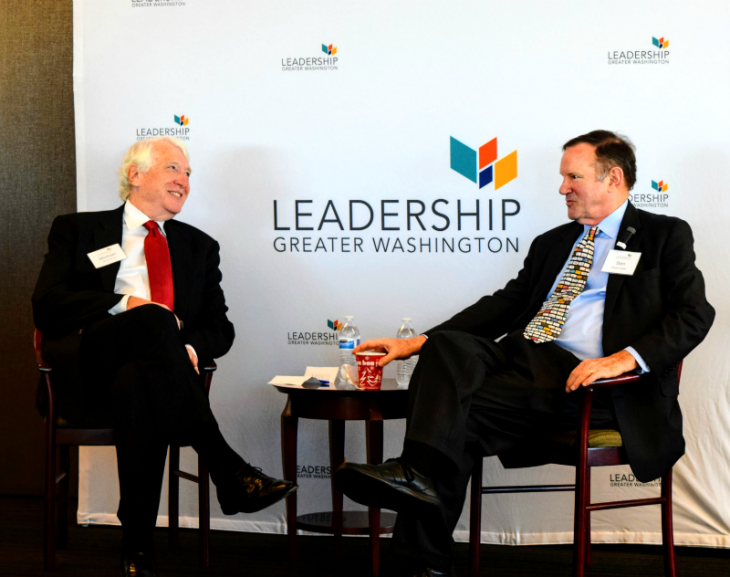