As millions mourn the loss and celebrate the life of Justice Ruth Bader Ginsburg today, enjoy this story from Karen Kalish ('90) about her friendship with RBG.

In 1994, I heard about a program in Philadelphia for Black and Jewish high school students: Operation Understanding. Its mission was to have the young people from the then two most-disliked groups in America learn about their own and each other’s race, religion, culture, and history.

I wanted to learn about it and possibly start it in Washington, DC which I did, with their permission and cooperation, of course. I called it Operation Understanding DC (OUDC) and it continues to this day. It is a year-long leadership program with nine Sunday programs, three-weekend retreats, and a three-week eye-opening summer trip to NYC, Philadelphia, DC, Atlanta, all over Alabama and Mississippi, Little Rock, and Memphis to meet people and see sights that have to do with civil rights, social justice and democracy.

In the second year, the students wanted to meet the Blacks and Jews on the Supreme Court. Ruth Bader Ginsburg, Clarence Thomas, and Stephen Breyer. Justices Ginsburg and Thomas responded to my letters immediately and invited us to come to the court on a Tuesday morning in October of 1996. (Justice Breyer never responded.)

Both justices could not have been more gracious to the students and their families that morning in the Lawyers Lounge of the United States Supreme Court. Justice Ginsburg had done her homework on our group and thoughtfully shared the story of Loving v. Virginia, the landmark decision of the U.S. Supreme Court that struck down laws banning interracial marriage as violations of the Equal Protection and Due Process Clauses of the 14th Amendment to the U.S. Constitution. Justice Thomas shared his life story and they were both open to any and all questions from the students. Justice Thomas enjoyed a photo op with each student and his/her parent under the portrait of Thurgood Marshall. Every class of OUDC has visited both Justices ever since.

In 1999, I turned OUDC over to the board and went off to the Harvard Kennedy School to get a master’s in public policy (at age 54 I might add!). Two years later I moved back to St. Louis after being gone for 34 years. A few years later, I started a similar leadership program for high school students there. It is called Cultural Leadership (CL). As I was putting the program together I wrote both Justices Ginsburg and Thomas saying, “It’s me again! I started a similar program here in St. Louis and we are coming to DC in June and would love to meet with you”. I got letters back from both with the same message – June is our busiest month – it’s when the decisions come down - and we are not available." I was crestfallen but there was nothing I could do. (The St. Louis program goes on their summer journey in June as soon as school is out so the students can get jobs for the rest of the summer.)

A few years later I turned CL over to the board (good founders have a succession plan rather than staying too long which is called Founders Disease!) and started another nonprofit, my third: HOME WORKS! The Teacher Home Visit Program (HW!). Before the pandemic we trained, supported and paid teachers to go to the homes of their struggling students to get their parents and families engaged in their education. A few years after I started HW!, I got a call from an elementary school principal in Columbia, Missouri, Peter Stiepleman. He had heard about HOME WORKS! and wanted to talk about putting it in his school. He said he would be in St. Louis in September and could we have lunch and talk about teacher home visits. Of course, I said. In August he called and said his wife and kids were coming with him and was there a restaurant nearby where they could have lunch while he and I talked about parent and family engagement in his school. Of course, I said, but your wife and kids? Where are you going? “Ruth Bader Ginsburg is my aunt, he said. We’re going to Washington for Yom Kippur!” I hung up the phone and shouted at the top of my lungs, “Thank you, Moses! Thank you, Jesus!” The universe had intervened and I was walking on air at the possibility. I immediately wrote Justice Ginsburg a letter similar to the one I had written several years ago – Hey, it’s me again, and I’d love to have the students in St. Louis/Cultural Leadership meet with you. Peter gave her the letter that night at their family dinner at her apartment in the Watergate and four days later I had a handwritten note from her in my mailbox inviting us to be at the Supreme Court the following June 17 at 4 pm. Nine months later! And we were and have been every year since! In fact, the CL-class of '13 was in the documentary about RBG 14 times! Even though I was no longer involved in CL, I would join the trip in DC for their time with the Justices. I always had a few words with her and with the added connection to her nephew, we had a few things to talk about.

I knew that she loved the opera and St. Louis has a great opera company so I began sending her the program every June. In fact, I had invited her to our opera but got the same response I had gotten years before – June is our busiest month… and I always got a thank you note.

In November 2019 I was introduced to a local artist, Zack Smithey, who had made a portrait of Elizabeth Taylor as Cleopatra out of jewels. It was stunning and I had to have one. Who do you want? He asked. Without hesitation, I said, RBG. He and I went online to choose an image and he made it and it is beyond fantastic. I had to send her a picture of it. I also had other things I wanted to tell her: I had listened to her book and was moved, and wanted to send her an article I had written about tikkun olam, and had read that she went shopping in NYC and I have a great list of stores, and Nina Totenberg had mentioned her in a speech she gave in St. Louis. So I wrote to her – all of it and more. And she wrote back almost immediately with a wonderful newsy letter and a beautifully-written piece – a reading – she had written on the women of Passover that have become a staple at many Seders nationwide.

A month later, I participated in three Zoom Seders and her reading was included in all of them. I had to tell her. I also thought she’d be interested in reading about the African American orthodox convert to Judaism young man who lives in my house. I was right. Another letter from her saying how much she and her daughter Jane liked that story. (Jane was living with her by then.)

Then, at the end of May, my synagogue decided to have a talent show they called the Oy Vey Café. I signed up to tell six Jewish jokes. It was a weird experience as I told my jokes into my computer screen with no feedback. I didn’t know if folks were laughing – or not. It turns out they were as I learned when the complimentary emails and texts came into my phone after my performance. I don’t know why but I somehow thought Justice Ginsburg might like these jokes so I sent them to her. And she did! How did I find out? She emailed me! I have an email from RBG! I forwarded it to her nephew Peter with the message, ‘OMG! Look what I just got!’ I wrote. I show it to anyone breathing in my presence! And since then we had become email penpals! I ended my letters to her with the same sentence:  I’m going to echo and repeat what everyone I know says and thinks – STAY WELL JUSTICE GINSBURG! We need you desperately.

P.S. And now I join the country mourning our loss of this wonderful woman who always did the right thing. A female mensch – a "fensch" – if ever there was one.

"She treated everyone the same, from a President to someone who knew her nephew, it didn't matter. That's the person she was,"  Karen Kalish ('90). Amid chemotherapy, RBG shared with Karen that her daughter was a wellspring of support and love, caring for her as they faced the trials of RBG's illness and the pandemic together.

Recently, Karen shared six Jewish jokes with RBG, who had heard one of them before and RBG wrote back to Karen, saying, "I had heard the one about Rabbi Moishe and the Pope before, but the others were all new to me, and every one provoked laughter." Karen tells us, "who shares six Jewish jokes with a Supreme Court Justice?!" Without further ado: the Pope and Rabbi Moishe

The Jewish people met and picked an aged, but wise, Rabbi Moishe to represent them in the debate. However, as Moishe spoke no Italian or Latin, and the Pope spoke no Yiddish, they all agreed that it would be a "silent" debate. On the chosen day, the Pope and Rabbi Moishe sat opposite each other for a full minute before the Pope raised his hand and showed three fingers. Rabbi Moishe looked back and raised one finger.

Next, the Pope waved his finger around his head. Rabbi Moishe pointed to the ground where he sat. The Pope then brought out a communion wafer and a chalice of wine. Rabbi Moishe pulled out an apple.

With that, the Pope stood up and declared that he was beaten, that Rabbi Moishe was too clever and that the Jews could stay in Italy.

Later, the Cardinals met with the Pope, asking what had happened. The Pope said, "First, I held up three fingers to represent the Trinity. He responded by holding up one finger to remind me that there is still only one God common to both our beliefs. Then, I waved my finger around my head to show him that God was all around us. He responded by pointing to the ground to show that God was also right here with us. I pulled out the wine and wafer to show that God absolves us of all our sins. He pulled out an apple to remind me of the original sin. He had me beaten at my every move and I could not continue."

Meanwhile, the Jewish community gathered around Rabbi Moishe. "How did you win the debate?" they asked.  "I haven't a clue," said Moishe. "First he said to me that we had three days to get out of Italy, so I gave him the finger! Then he tells me that the whole country would be cleared of Jews and I said to him, we're staying right here."

"And then what?" asked a woman. "Who knows?" said Moishe, "He took out his lunch so I took out mine." 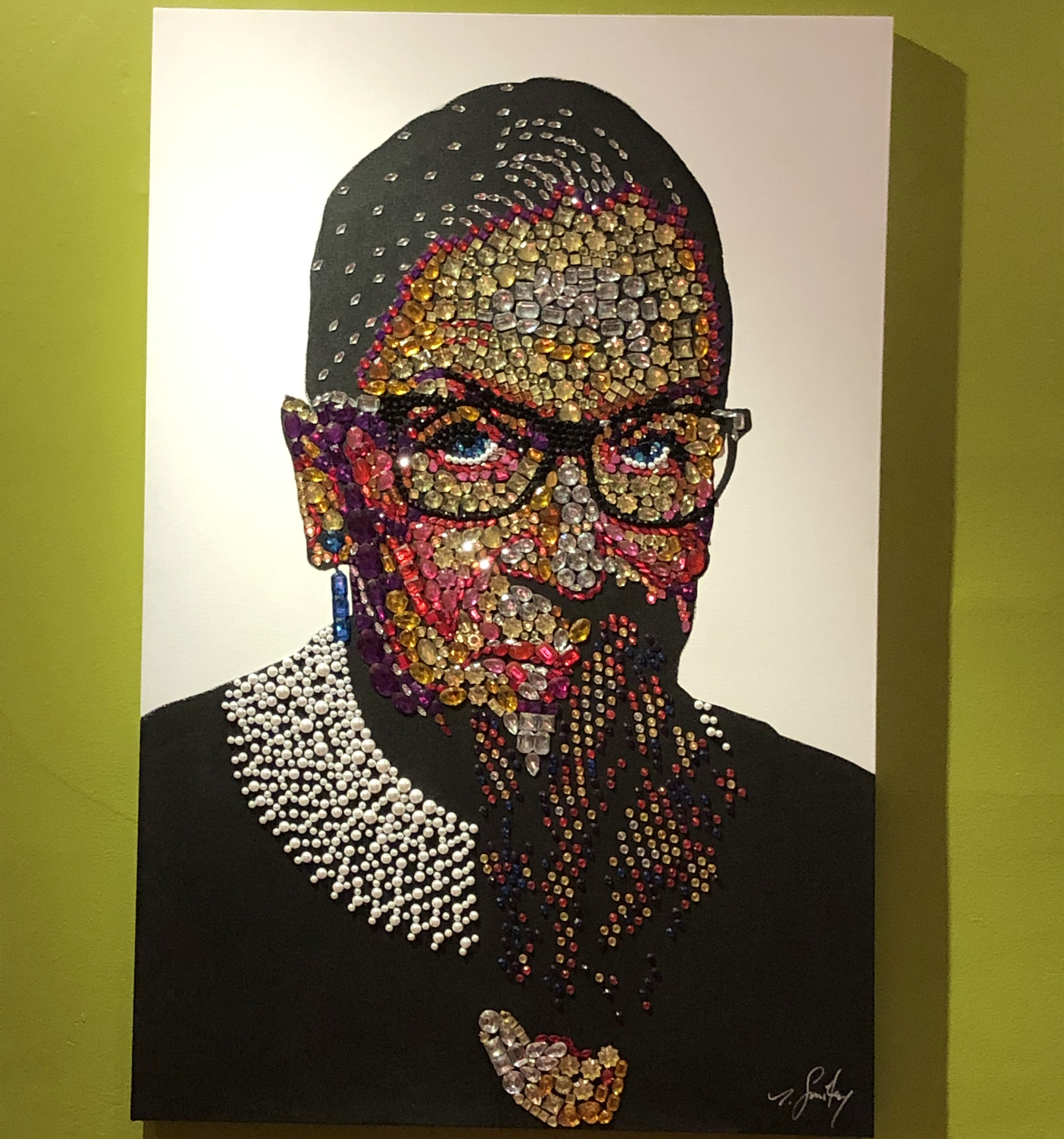