"Embrace reckonings. When you lose, it paves the way for future victories. Nothing clears your mind like a reckoning," said Ted Leonsis, founder, chairman, majority owner and CEO of Monumental Sports & Entertainment, which owns and operates the Washington Capitals (NHL), Washington Wizards (NBA), Washington Mystics (WNBA) and Capital One Arena. This is just one of the nuggets of leadership gold Leonsis shared during our recent Lessons in Leadership. The event, sponsored and hosted by PNC Bank, was facilitated by Richard Bynum ('13), PNC's President for Greater Washington & Virginia.

From his entrepreneurial beginnings of mowing lawns to his current position with Monumental Sports & Entertainment, it's clear what Leonsis values in life. After a teacher told him he was not college material, he was motivated to prove her wrong. When asked what eventually got him into Georgetown University, he said, "A little caring and kindness goes a long way." Through his storytelling, he captivated the audience with relatable anecdotes about his life.

Among some of the tweets from the audience during the event:

“A little effort and kindness can change a lifetime” Ted Leonsis pic.twitter.com/pYetJof8XT

All in on vision of Washington DC as a super city as shared by Ted Leonsis this morning @lgwdc#Lessonsinleadership. “It is our birthright” and oh what could we could do when this region’s intelligence and insight and lived experience could be elevated.

"We have a pending issue where Washington, DC will run out of land. Where will we grow?" asked @TedLeonsis @PNCBank today @lgwdc Lessons in #Leadership. Due to building height restrictions, growth will be on the other side of Anacostia. Must show concern for existing residents. https://t.co/7pf6EJdVOk

"Material things don't matter. Experiences and relationships do. I want to leave more than I take." - Ted Leonsis #leadership #GreaterPurpose

"Empathy is the most underrated emotion. At my companies, we focus on empathy. I believe in human emotions. People want to believe in the goodness of people." - @TedLeonsis#GreaterPurpose #leadership

"Ted Leonsis is the definition of a true business exemplar, a civic leader and a role model," said PNC President, Richard Bynum ('13).

And of course, the 2018 Washington Capitals Stanley Cup Championship Ring made an appearance.

Couldn't make the event? We have you covered. 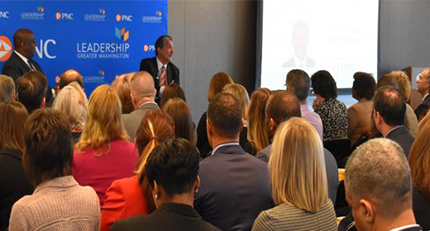