This week, Leadership Greater Washington (LGW) and the Washington Regional Association of Grantmakers (WRAG) presented Session VI of the Thought Leadership Series on housing affordability in the region entitled, ‘Housing Affordability with a New Administration.’

During the event, LGW members joined together at PNC place in Downtown D.C. for two panel discussions designed to survey the shifting political landscape as it relates to federal housing programs and funding, and the potential impacts to local governments responsible for ensuring sensible housing options for the region's residents.

“Frankly, I don’t think the administration expected to win, so they didn’t put out a housing agenda. It’s not at the forefront of any presidential race to think about housing.”

As always, our panel discussions were moderated by Melissa Bondi, Consultant Lead for Mid-Atlantic Local and State Policy at Enterprise Community Partners. For our first panel, LGW welcomed:

During our discussion on the federal housing landscape, these national experts explored possible changes to funding mechanisms – including reducing the value of tax credits that make investment in affordable housing projects viable; the role of the mortgage-interest deduction on hig-value homes; and federal appropriations for the U.S. Department of Housing and Urban Development and other agencies that provide critical housing resources directly to residents and communities all around the country.

“We’re concerned about tax reform and federal spending. For this year, if they maintained funding at last year’s rate, that’s equivalent to about $1.5 Billion in cuts to housing benefits. Those cuts impact peoples’ lives directly.”

While the federal housing experts anticipate further budgetary cuts, there are additional impacts to the housing landscape expected from Trump’s campaign promises. Positively, there may be hope for housing affordability projects to come in the form of a potentially massive infrastructure spending budget, part of which is set aside for housing projects. On the other hand, the panel recognized that many housing benefits will be threatened by the administration’s position on stopping federal dollars of any kind going to so-called ‘sanctuary cities.’

“It’s a real question no matter what the federal funding levels are. The people in the country illegally aren’t eligible for housing programs, but those who are eligible are being affected by the political issue of sanctuary cities.”

To understand the regional impacts on Greater Washington from possible cuts to the Low-Income Housing Tax Credit and other finance vehicles for housing, the following local housing leaders shared their perspectives:

“The housing strategy coming out of the Trump administration is to push the issue to the states and localities.”

The local impact panel agreed that as federal financing vehicles for housing efforts experience higher demands from communities across the country, the liability in funding housing programs will increasing fall on the shoulders of local governments.

“If those funds are being cut, what’s the local response? Our engine for producing housing units is the Low Income Housing Tax Credit program. If the [funding] gap goes up, it puts a lot of burden on the local government. That’s not an alternative fact, it’s just a fact.”

“Having our funding tools threatened is a problem… We can’t just go out and keep raising taxes on people; they’re not going to stand for that.”

“We should be very focused on making sure we address the housing affordability issue in this country. This is not about charity, this is about human capital.”

Throughout LGW’s Thought Leadership Series on housing affordability, housing experts from all around the region have pointed to the housing affordability crisis that affects Greater Washington’s economic competitiveness. To face the issue, the panel suggested, would require important contributions from more than just the usual suspects.

“This is not only local government’s problem to solve. We need to hear from employers, [and] the financial and advocacy sectors.”

View photos from our session here. 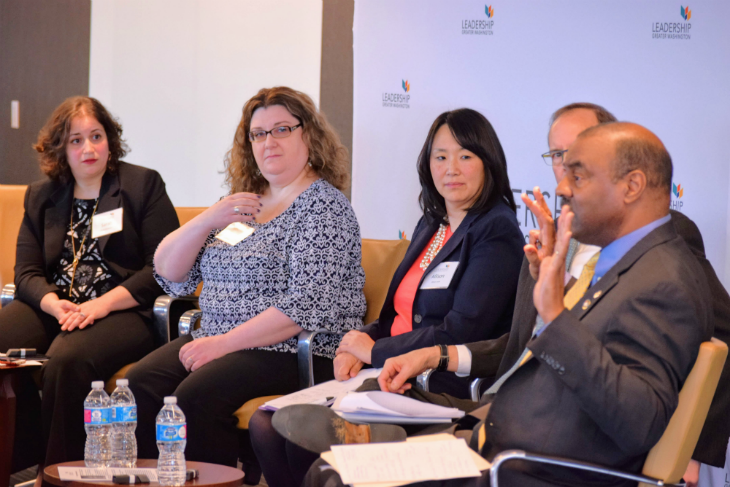