The Class of 2020 convened for Public Safety Day to get a firsthand glimpse of what community policing is like in our region and took part in a thought-provoking forum on the role of leadership in building safer communities.

Issues of public safety and policing are under ever-increasing scrutiny. The same is true of police in general, in a world where even guarded moments can go viral.

There is an increasing focus on accountability, transparency, equity and community engagement in forward-thinking police departments across the country. Locally, police departments are finding new ways to elevate public safety as they seek to better serve as guardians of justice and peace.

How is police work shifting locally? Departments in our region are seeking to create more inclusion in their ranks in terms of race, religion, gender, socio-economic status, and sexual orientation. There is an emphasis on recruiting within the community to assure that police represent the districts they serve. And police are working on training that will improve their ability to deescalate situations that can lead to violence in the line of duty.

To draw perspective, we assembled a panel of exceptional leaders who are doing the hard work needed to improve the state of community policing. We were joined by; Pat Burke (’19), Executive Director, DC Police Foundation, Monica Hopkins, Executive Director, ACLU-DC and Marcus Jones, Chief of Police, Montgomery County.

The tragedy in Ferguson put police work in a different light nationwide. Panelists discussed how the shootings of Michael Brown and Tamir Rice have had an impact. As one example, the use of body-worn cameras is becoming more universally accepted.

Montgomery County Police Chief Marcus Jones discussed ways body-worn cameras solve problems, “body-worn cameras are the best thing that happened to our police department. It gives another light, another view of the facts. We are able to hold officers accountable when we see behavior that is against our policy. In the age of social media, officers understand that the world is watching them.”

Chief Jones discussed the importance of reversing the stigma in the public perception of police. “When we talk about accountability and what the public expects, what we consider first is our legitimacy. When we are referring to legitimacy, we are talking about everything the police department is doing out there in the community. Just because we can do something doesn’t mean we should," said Jones. “We talk about the need for relationship building in our communities. Sometimes the people who need us the most trust us the least."

Another change in DC post-Ferguson was the passing of the Neighborhood Engagement Achieves Results Act (NEAR Act) in 2016 that tracks the race of individuals stopped by officers. Hopkins discussed the policy, “we passed the NEAR Act in DC which was an omnibus bill that included data collection on race. Before we did that, we had to collect data through Freedom of Information Act (FOIA) requests. We collected three years of data on arrests. We found racial disparities across the board when we compared records in parts of the census tract that include large black populations.”

Burke (’19) expressed the importance for police departments to reckon with the past, “We need to talk about the fact that America does have a racist past. Look at our history. There is a reason we don’t use water cannons or dogs to disperse crowds. It dates back to Sir Robert Peel. His quote, ‘The police are the public and the public are the police.’ If we do not have the respect of the people, policing doesn’t work. It starts from the top and it takes strong leaders.”

The problems aren't limited to issues of racial justice. People in poverty are also receiving more arrests and citations than privileged groups. “When we look at crime and why people are being arrested there is a big connection to poverty. For example, when you look at the arrests for public intoxication and marijuana offenses, people in poverty are more likely to consume in public since they have less access to places to congregate in private. So, we are seeing arrests happen disproportionately not only from a race perspective but from a poverty perspective,” said Hopkins.

ACLU-DC is making a number of recommendations for improving how police serve. Hopkins gave us an overview, “we are recommending changes to policy. One is allowing officers to have more discretion to make non-arrests. Two, decriminalizing low-level conduct. You can still cite, but there shouldn’t be an arrest. Three is looking at the narcotics and special units called the “jump-outs,” or the divisions that ride up and jump out to conduct searches. We are not calling for disbanding them, but we are calling for an investigation. And four, strengthening investigations into complaints.”

As police departments in our community evolve, they face challenges in recruitment and maintaining morale in their departments. As leaders seek to shift negative stereotypes of police and deepen community engagement, they rely on the public to create inroads and show support. “As leaders of police departments, we have to work extra hard to keep up morale and let our officers know that they are needed and that they are worthy. As an officer, we go through challenges. When people are calling our officers names or racial slurs it becomes a morale issue. When you go to work, you want to feel that you made a contribution to the community every day,” said Jones.

Jones reminded us of the motivating factors that inspire police officers to pursue a career in law enforcement. “I often think back to the kidnapping and murders at Wheaton Plaza. The Lyon sisters, who disappeared in 1975, and our officers who picked up and solved that cold case in 2013. Finding the killer of those kids. Examples like that - that is the reward.”

Burke ('19) discussed victories in developing a more diverse police force in DC.  "I think about the diversity of religion, like how we were able to accept Sikh recruits by allowing them to wear the Kara turban and carry the Kirpan sword tucked into their belts. Or that we are able to accept Muslim recruits since we began allowing officers to wear beards. I think about our initiatives to recruit LGBTQ people and that I can go to pride and recruit at the transgender table.”

Next, members of the Class had the opportunity to share their perspectives on ways we might provide a safer community for all, here are some of their questions for the panel:

“Do you think it would help policing in DC if we were to stop referring to neighborhoods as wards? So, instead of Ward 7, we would talk about Anacostia or Deanwood. We don’t say 'Ward 1’ when we talk about Georgetown. This puts the focus on the neighborhood.”

Hopkins: “Great point and I agree. We looked at a study from a few years ago and black people are being arrested in Friendship Heights at the same rate as they are in Deanwood. Friendship Heights has the highest white population in the city.”

“I saw the recent study that shows that while only 34% of the District’s black commuters travel by vehicle, 78% of all people arrested for driving in DC without a permit were black. What is the training that tells police officers, ‘I don’t care where you grew up, leave the bias at home.’?”

Burke ('19): “It goes to the training. Making sure that we are talking about implicit bias. We need to look at what it means to police in a diverse society. For example, we take all of our officers in DC to the Museum of African American History.”

Jones: “We have to understand our history, for me, I grew up in the segregated South. 1970 was the first year my high school was integrated. Growing up in that era I understood how blacks felt sitting in the backs of buses and how policing was used as a tool of oppression.”

Burke (’19) offered a closing thought to cap off the panel: “We have to ask ourselves the question as police, are we warriors, or are we, guardians? We have to come back to what our role is. I would propose that we are guardians. We need to think about how we might be stigmatizing people.”

We closed the panel grateful for the level of thoughtfulness and consciousness each speaker brought to the dialogue and with a deeper sense of how to advocate for safer communities. Prior to the panel, members of the Class of 2020 participated in ridealongs with officers in the community to understand the challenges they experience and the tactics they use. To close the day, we went through a number of immersive exercises with the goal of gaining an increased understanding of community policing and public safety.

Thanks to our partner, Metropolitan Washington Council of Governments for supporting the Signature Program Class of 2020. 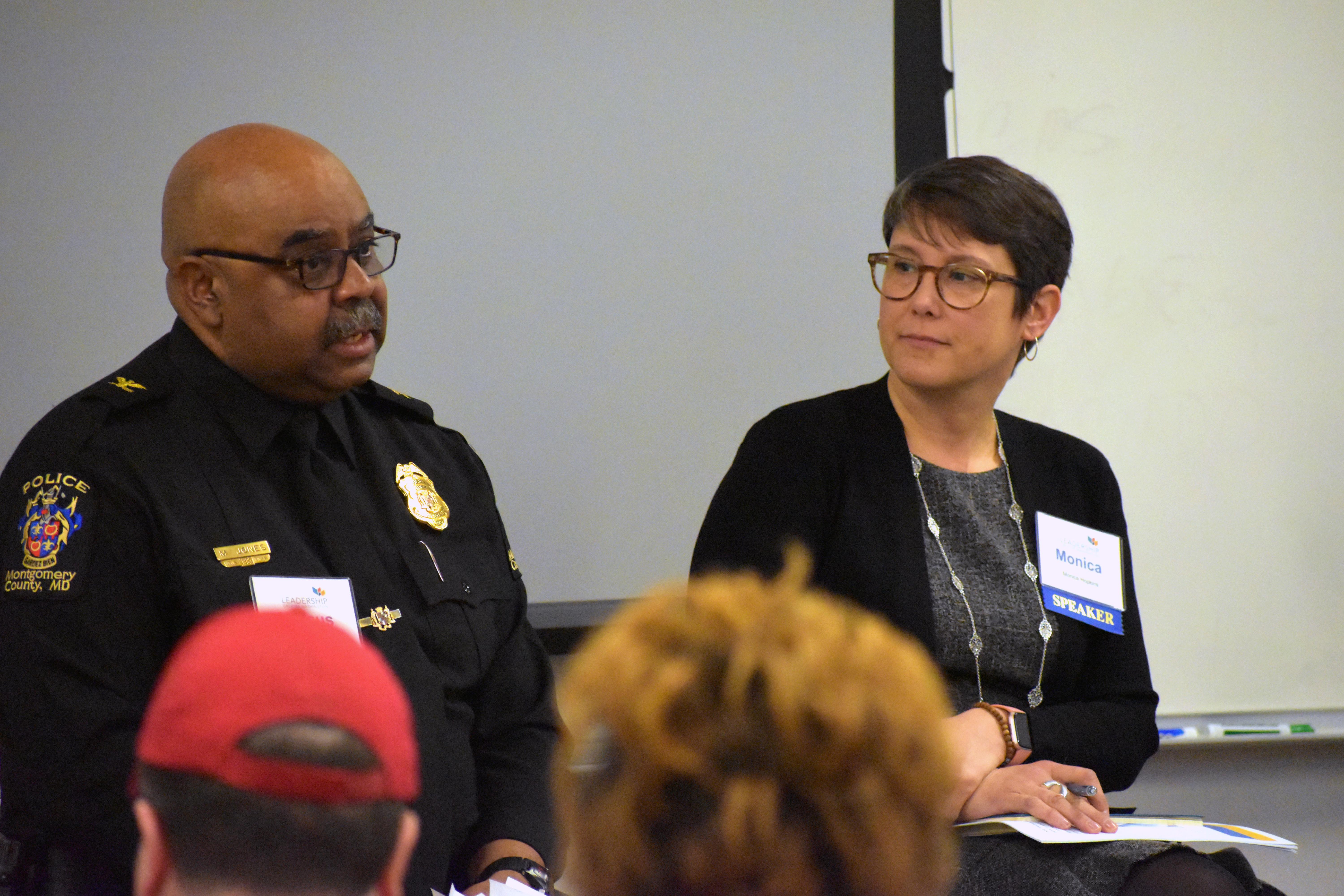