“At the time people were using the analogy that this isn’t a sprint, it’s a marathon. But this is really a relay race.” – Tamara Lucas Copeland (’04)

Movements that bring people of all races together are vital to undoing systemic racism. But sometimes there is so much focus on people coming together in the first place, we forget that it is just as important to stay together in the long run.

In 2015, the Washington Regional Association of Grantmakers (WRAG) put together a series called, Putting Racism on the Table. Freddie Gray had just died in the back of a police vehicle in Baltimore. The city and nation were in mourning.

Tamara Lucas Copeland ('04) was the President of WRAG at the time. Her phone was constantly ringing with calls from CEOs in WRAG’s network. They wanted to know what they should be doing differently. Knowing one person couldn’t possibly have the answers, she convened 12 CEOs to discuss a plan. They resolved to host a series called Putting Racism on the Table to bring our region’s philanthropic leaders together to broadly look at systemic racism, inequity, and implicit bias.

Participants were eager to see action, but it was clear that there was not yet a shared language or framework on what could be done.

Expanding the Table for Racial Equity

In a pivotal moment during one of the events, a participant shared a quote from John W. Gardner, “the first step of leadership is not the action itself, it is understanding.” Many were calling for immediate action. Participants talked about the digital divide, workforce development, and community policing. But the biggest problem wasn’t one specific issue, it was the system of racial inequity as a whole. At the time, most people in the philanthropic community didn’t even know how to talk about this or what could be done.

But a larger movement was taking shape. Leaders were firming their commitments to learn, collaborate, and make changes. Then, in 2018, Leadership Greater Washington President and CEO Doug Duncan (’15) reached out to Tamara. Doug was looking for an issue area for LGW to work on. He told Tamara, “we need to get together on this.” 2016 had created a turning point, and it became clear to Tamara that they needed to broaden the reach of the work.

The two decided to put together a new programming series called, Expanding the Table for Racial Equity. This new program would bring together cross-sector leaders from throughout the region to address structural racism. This wasn’t about individual bigotry. They knew that the problems in our region, and the country itself, were bigger and more intertwined. The series was a forum for educating and empowering leaders. It was freeing because it helped leaders form a shared language. It gave people permission to have conversations that had heretofore not been had.

They built a diverse coalition of CEOs and Trustees to participate in the series and brought in cutting-edge thought-leaders like Ibram X. Kendi and Robin D’Angelo.

The series culminated in a civil rights learning journey with LGW members, WRAG members, and guests that spanned Memphis, Tennessee, and several locations in the Mississippi Delta: Jackson, Mississippi; Selma, Montgomery, and Birmingham, Alabama. They visited the 16th St. Baptist Church where the Ku Klux Klan carried out a horrifying terrorist attack in 1963 that killed four little girls. They walked the Edmund Pettus Bridge, where Congressman John Lewis had his skull fractured by a police baton in 1965. Through this journey, their commitment to each other, and this movement crystallized.

LGW and WRAG included key partners across the community like Chuck Bean (’05) from the Metropolitan Washington Council of Governments, Heather Raspberry (’18) from the Housing Association of Nonprofit Developers, Rosie Allen-Herring (’02) from the United Way of the National Capital Area among many more.

Accelerating the Shift in Local Philanthropy

Through the discussions during the series, something began to rapidly shift in local philanthropy. Leaders decided to center the community voice. They wanted the lived experiences of people of color to shape their work.

“There was a genuine desire for real conversations about Black people’s experiences. So many of our conversations were happening at same-race tables. We didn’t feel this was advancing the dialogue enough,” says Tonia Wellons (’20), one of the series participants. At the time, Tonia was the VP of Community Investment for the Greater Washington Community Foundation.

This series helped center racial equity in our region’s philanthropic efforts. Years ahead of the murder of George Floyd, and the pre-existing inequities exacerbated by the pandemic, LGW leaders were hard at work creating this responsive shift in philanthropy. By the time Tonia took over as President and CEO of the Community Foundation in 2019, a commitment was made to prioritize funding for organizations led by people of color working to undo the impacts of systemic racism on the ground, at the community level.

“All of these things were primed so that once this crisis hit, it was not a huge leap in understanding for leaders in our community. We had already had difficult conversations about how to prioritize funding. It was not a slam dunk. We had to spend many sessions talking about why that was important. Biases in fundraising are real. We had to prime the pump and make the case. But once we did that, everyone was all-in,” says Tonia.

Through LGW, a collective commitment was made to learning, changing hearts and minds, and working together. Chuck Bean (’05) says it perfectly, “it is easier to get things done when you have relationships with other people.” Racial biases have long been a detriment to non-profit organizations that are historically funded at lower levels and beholden to restrictions that influence programmatic decisions in negative ways. The community was stepping up to change this through a diverse coalition of leaders from government, business, and non-profit sectors.

The needed conversations took place throughout the entire LGW community. Attorney Rachel Kronowitz (’15) started holding monthly dinners to facilitate open and honest conversations about race, and how leaders could have a lasting impact to change the narrative. Heather Raspberry (’18) held member dinners that would help leaders understand the impacts on vulnerable communities in our region. Kelly Veney Darnell (’14), COO of the Bipartisan Policy Center, started hosting a recurring dinner to engage on topics of racial justice. All of these groups still meet to this day.

The movement was surpassing its most difficult obstacle: keeping people together over time to deepen active commitments and form the relationships needed to meaningfully shift paradigms.

With this momentum, the philanthropic community responded: LGW members like Nicky Goren (’13), Hanh Le (’20), and Jennifer Lockwood-Shabat (’15) all lead sea-change within high-impact local philanthropic institutions to make the shifts a reality. The sector as a whole began having open and honest conversations about ways to best support Black-led organizations.

Applying the Change in the Community

This shift in philanthropy helped many LGW non-profit leaders respond to the pressing challenges brought on by the pandemic. One example is Koube Ngaaje (’20) Executive Director of the District Alliance for Safe Housing – our region’s largest provider of housing and services for survivors of domestic violence and sexual assault. Koube participated in the Expanding the Table for Racial Equity series and spent her first two years at DASH building relationships. In 2019, she reached out to then LGW-chair, Pinkie Mayfield (’01), to let her know she was ready to apply for the Signature Program. After, she began to attend the dinners at Rachel Krownowitz’s house at the invitation of Margarita Rozenfeld (’10).

“I don’t know if DASH would have survived COVID the way we did without LGW. It was incredible to have a body of leadership I could lean on so much at a time when DASH survivors needed so much.”

Domestic violence has become a pandemic in and of itself during COVID. In fact, DASH started receiving four times the number of calls in the early days of the pandemic. Survivors were trapped in homes with abusers with nowhere to run. DASH is a provider of direct and critical services, led by a person of color. The support system Koube needed was in place.

Koube says, “for me, leadership is about relationships. It is impossible to change narratives and make shifts in society without being connected to like-minded people committed to doing the work for the right reasons.” When Koube had questions about personal protective equipment for staff, legal services for survivors or housing support, and filling critical staffing vacancies she was able to pick up the phone and call someone in LGW. The Signature Program created the space for these relationships.

At the outset of the pandemic, DASH projected a $350,000 funding deficit as a result of the economic downturn. On March 15 (the day before her birthday), Koube planned a staff retreat. Her team had questions about how DASH would overcome this downturn and protect the children and families they serve. Koube immediately started communicating with her donors. She leaned on her LGW classmates. She was welcomed with open arms. It felt like going home.

It was an incredibly hard-fought journey to build out the needed infrastructure to provide for survivors and take on what the pandemic represents for them. Koube’s LGW classmates stepped up. DASH gained more individual donors than ever before, and Koube knew where to turn to ramp up grant funding. The commitment was there in the community. DASH closed the funding deficit. They raised $380,000 toward their goal and brought in over 550 new donors.

The Class of 2020 “Virtually Unstoppable” rallied around Koube in many more ways; Bettina Stern (’20) and Lisa Wise (’20) had lunches delivered to DASH staff from Chaia Tacos. Paola Moya (’20) provided design services for one of DASH’s office spaces through Moya Design Partners. Ariel Levinson-Waldman (’20) invited Koube to serve on the DC Access to Justice Commission. The class stuck together.

LGW connections foster transformative regional change. That change starts with the individual and the relationships they form through the Signature Program. Sometimes the change happens on a micro-level. Other times it is systems-wide.

“What we did wouldn’t have been possible if Tamara Lucas-Copeland and others in LGW had not done what they did in 2018 and the years that followed. The positive shift we see today is a derivative of that. When I joined DASH, founder Peg A. Hacskaylo (’10) had already changed the way we center survivor voice and support communities of color,” reflected Koube.

The movement LGW helped formed has stayed together. It is helping our region make the systems change needed to disrupt the systemic racism deeply embedded in our communities. And it is not a sprint or a marathon, it is a relay race. Let’s run. 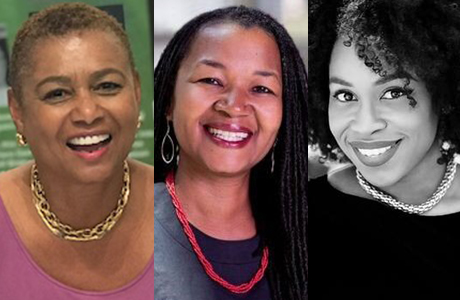