The summer of 2020 felt like a freefall for many of our region’s non-profit leaders. Heads of bedrock local institutions needed help. Some were hesitant to approach local foundations and sponsors out of concern they would be turned away due to the economic havoc caused by the pandemic. Organizations that serve as a lifeline for much of our community were in jeopardy.

Fundraising events were canceled; program delivery was paused. Many direct-service providers suspended the in-person components of their work altogether. Others were cobbling together virtual offerings or hustling to adapt to physical distancing. Leaders working in the non-profit sector faced difficult decisions about furloughing staff.

It was the summer of the devastating killings of George Floyd, Ahmaud Arbery, Breonna Taylor, and Rayshard Brooks. Leaders of key local non-profits were trying to muster the resilience to keep going when so much was broken. For Sara Gibson (’15) and Nancie Lynch (’16), many of the leaders of these organizations are not just colleagues, they are friends.

Back in 2015, Sara had participated in the LGW Signature Program where she built many new relationships. She took a job as the Chief Development Officer for AppleTree working with visionary LGW classmate Jack McCarthy (’15), to close the achievement gap for preschoolers. Nancie Lynch is the Executive Director of the Richard E. and Nancy P. Marriott Foundation and was on the board of AppleTree at the time.

“The first time I met Sara was at an AppleTree board meeting. Jack told me that he met her through LGW. She encouraged me to apply to be a part of the Class of 2016. As a friend, she is an incredible person. We have a lot of similarities in how we look at innovation in the non-profit sector and spend a lot of time thinking of different factors in the impact investing space.”

Sara had served on the development side of local non-profits for years. She had a reputation for inventiveness and not accepting the status quo in fundraising. She started to talk with people in LGW about starting a new consultancy to help non-profits unlock new forms of revenue.

She connected with colleague Tom Bartlett (’20), a veteran in the field of corporate social responsibility for Fortune 50 companies. Tom and Sara launched their business 20 Degrees in 2018.

Sara’s LGW classmates encouraged her in this new venture and her experience in the Signature Program enhanced her insight. The business she founded with Tom took off. Early on, they were able to double the income for an organization that had lost its entire revenue stream due to a discontinued government grant. More new clients followed. Years of experience, hard work and relationships were paying off for Sara and Tom.

Even before 20 Degrees, Sara had encouraged Tom to apply to the Signature Program and he was accepted. When things got hard the Class of 2020 formed tightly knit bonds. They became known as “Virtually Unstoppable,” a name that speaks to their resilience and the fact that even throughout the quarantine, the program year continued to serve its greater purpose.

Sara recalls the Spring of 2020, “when the bottom fell out Tom and I started creating what we thought was a way forward for non-profit leaders. Those were dark nights. What we wanted to do was write something that would help the people who were holding these vital missions in their hands, who don’t always know where to go. I don’t know if people understand how lonely those roles can be. I was a fundraiser during 9/11 and at times I just wanted someone to tell me what to do to get my feet under me again.”

Sara and Tom built a COVID-19 toolkit. It was a survival guide for non-profit leaders. They poured years of know-how into it. The kit had the information they would usually reserve for clients who engaged with their services, but they gave the kit away for free on their website. The Washington Post did a story about Sara and Tom’s work and the threats non-profits were facing. The Chronicle of Philanthropy picked up the toolkit in one of its first online guides for leaders navigating COVID-19. Within two weeks, the kit had been downloaded on their website 10,000 times.

Emails flooded their inboxes with thank-you notes and follow-up questions. They dug in and started replying to those emails, answering the phone, and offering their savvy advice to all who asked. The nights and days blended. But the challenges were too big to back down from. Their hearts were with the organizations protecting the most vulnerable. They could see their work was hitting the mark.

Nancie saw all of this unfolding and saw an opportunity. In May, Sara and Nancie created a pilot program called the Financial Resiliency Accelerator, funded by the Richard E. & Nancy P. Marriott Foundation. They started with a cohort of 10 non-profit organizations. It was designed to help uplift communities with the greatest needs. Some of the organizations were medium in size and some were big enough to have a CFO. They helped the leaders build the skills, relationships, and resources needed to not only overcome the pressing challenges the pandemic created but find new paths to sustainable funding.

Sara remembers, “People were afraid to say they needed this kind of help, especially from their foundation partners. We were building a place of trust where people could ask for what they needed. Part of being resilient is being able to show up in a way that allows people to work through the challenges of the moment in a space that is safe and productive.”

The participants were trying to respond to an impossible moment. And they were making strong progress. The pilot showed Sara, Tom, and Nancie that this was a powerful program. The cohort model became a lifeline of support for the participants in ways they had not foreseen. Tom says, “the non-profit sector is full of people that put others in front of themselves. Many of them were not allowing themselves to focus on their own human needs.”

With the pilot completed successfully, the conversations shifted. This is when Rachel Kronowitz (’15), Founding Partner of the law firm Gilbert LLP, got involved. She and Sara had become close during their Signature Program year, bonding over their love of the District and baking. “Sara is such a unique, warm, authentic person who really just gets stuff done. I found her incredible. I am a lawyer, and certainly not a development professional, but Sara helped me think creatively in my work as a board member of non-profits.”

Sara and Tom saw an opportunity to expand the pilot they created with Nancie to help smaller non-profits focused on workforce development. The non-profits needed to keep their work going in a time when job opportunities were evaporating. They prioritized leaders who were Black and Indigenous People of Color working on solutions in those communities.

Sara and Tom pitched Rachel on the new idea, it was to be called the Endurance Fund. The idea was to create a new cohort that would support these community-based organizations in a way that both bolstered them for the pressing challenges and helped them build a sustainable future.

Rachel serves on the Board of Directors for the Catalogue for Philanthropy and presented the idea to them. The Catalogue for Philanthropy is made up of high-performing non-profits with under $300 million in annual revenue. Their members made for excellent candidates. The Endurance Fund would not only bring together leaders for a six-month cohort but also create direct cash investments to support their revenue pivots. Naturally, they enthusiastically chose to partner with 20 Degrees.

Tom says of the Endurance Fund, “This is still the fight we are in. Organizations still need a new path forward; they need financial fundamentals and new ways to strengthen their organizations and grow revenue. What we have seen through the work we deployed is how to bridge that. It places the agency in the hands of the leaders and amplifies their brilliance.”

The Endurance Fund is now at the halfway point with its first cohort, which includes several LGW members, and are just about to begin their journey with the Catalogue for Philanthropy. 20 Degrees provides training, tools, and support around financial resiliency. 85% of participants are more comfortable with their financial position in the next 6-12 months and beyond because of the program. Leaders valued scenario planning, financial modeling, and analysis and plan to use the work to communicate internally, with board members, and with funders.

It all started with a friendship between Sara and Nancie formed through LGW. Rachel says, “I have to celebrate Nancie for having the vision to do the pilot. She has her finger on the pulse of what is going on in this region and has a clear recognition of where value can be created.”

People come into the Signature Program from different places in their careers. People who go through the program talk about the sense of encouragement they feel. For professionals at the top of their industries, it is hard to be open and vulnerable. But through that vulnerability, trusted relationships are formed that unlock new potential. That is part of the magic of Leadership Greater Washington - watching the bonds formed through the program transform leaders and, as a result, our community.

The Endurance Fund was created with the goal of ensuring the continued survival, endurance, and growth of these vital organizations. To learn more about the Endurance Fund please click here. 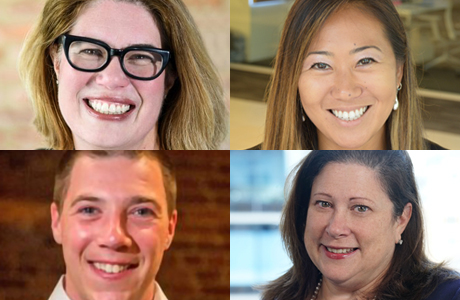