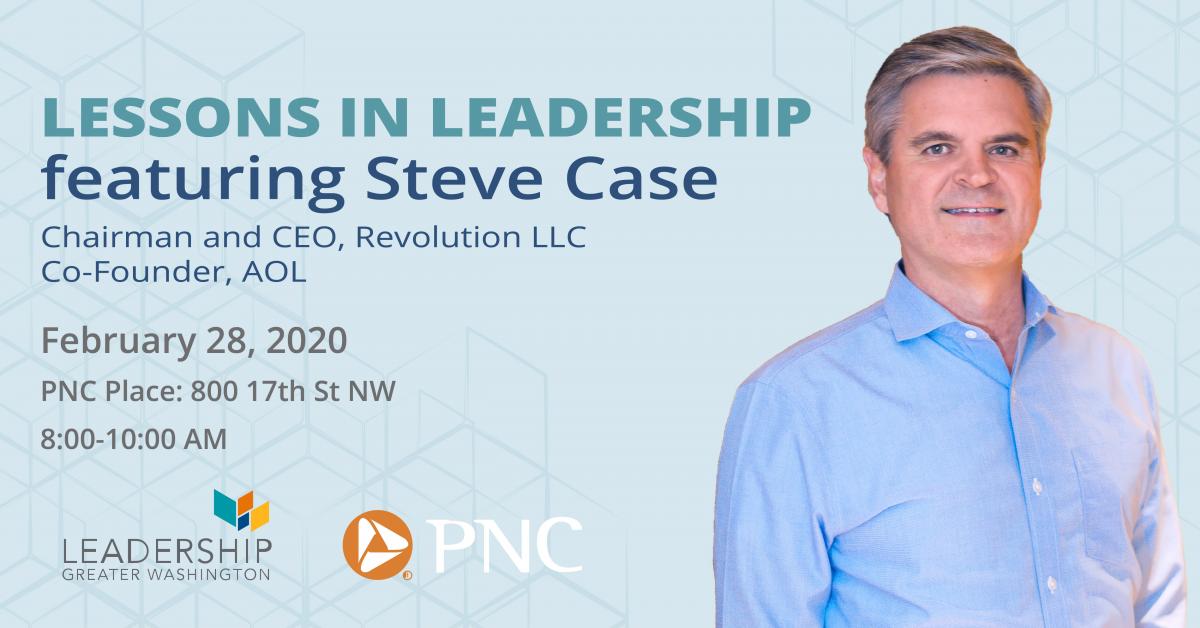 The next session of our Lessons in Leadership series will feature Steve Case, Chairman and CEO, Revolution LLC and Co-Founder, AOL

Join us for lessons from the renowned American entrepreneur and investor who pioneered the concept of social media and first brought the power of the internet to the mass market.

LGW members may bring guests at no cost, so feel free to bring a friend or colleague!

About Our Distinguished Guest

Steve Case is one of America’s best-known and most accomplished entrepreneurs and philanthropists, and a pioneer in making the Internet part of everyday life. Case co-founded AOL in 1985 and under his leadership and vision, AOL became the largest and most valuable Internet company, driving the worldwide adoption of a medium that has transformed business and society.

Case is Chairman and CEO of Revolution LLC, a Washington, D.C.- based investment firm that partners with visionary entrepreneurs to build significant ‘built to last’ businesses. In 2014, Steve and Revolution launched the Rise of the Rest, a platform to shine a spotlight on entrepreneurs that are starting and scaling businesses outside of Silicon Valley, New York, and Boston.

Steve’s passion for helping entrepreneurs remains his driving force. In 2011, he was the founding chair of the Startup America Partnership—an effort launched at the White House to accelerate high-growth entrepreneurship throughout the nation—and member of President Obama’s Council on Jobs and Competitiveness where he chaired the subcommittee on entrepreneurship.

He is also the author of New York Times bestselling book, The Third Wave: An Entrepreneur’s Vision of the Future.