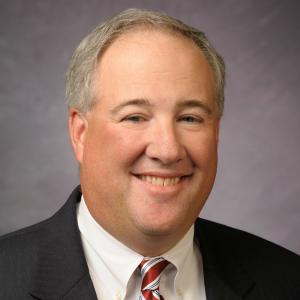 Terry Kenny is Market President for TD Bank's Mid South Region, joining TD Bank in this capacity in April of 2010.  In his role, Terry is responsible for managing TD Bank's commercial banking and lending teams in the greater Washington, D.C. area, and for continuing to build out the bank's footprint in Maryland, Virginia, Delaware, and the District of Columbia.

A seasoned executive, Terry has 36 years of commercial banking experience.  Prior to his current position, he spent 23 years with SunTrust Bank in the greater Washington area. While at SunTrust, Terry served in various capacities as the Commercial Team Leader of the Greater Washington Region Diversified Group, Professional Practice Group Team Leader, a Middle Market Group Manager, and a Senior Credit Officer in his time at SunTrust.  Terry began his banking career at Maryland National Bank, where he spent five years in the commercial banking department.

Terry holds a bachelor's degree in economics and political science from Frostburg State University in Maryland, and a master's of science in finance from American University in Washington, D.C.

He is an active member of the local community, serving as an at large board member of the Greater Washington Board of Trade where he also serves as a member of the Transportation and Land Use Committee; as an executive committee board member of the Montgomery County Chamber of Commerce where he also serves on the Public Safety Awards Committee; a member of The Economic Club of Washington, D.C.; and is a Leadership Greater Washington graduate, class of 2016. Terry recently joined the board of A Wider Circle, a charitable organization with a mission to end poverty in this country. Terry is a past member of the board and finance committee of the National Capital Area Council, Boy Scouts of America.  Terry is the Past Chair of the TD Bank Mid South Diversity Council and led the first Metro Washington Minority Mentoring Group.  He has also served as Chair for the TD Mid South United Way employee giving campaign in four of his eight years with the organization.  Terry has also volunteered his time with the Montgomery Village Foundation, Gonzaga Father's Club of Gonzaga College High School, and the Jesuit Lacrosse Classic.  Terry has also been an active volunteer with various Food Bank's in the area, including Martha's Table, DC Central Kitchen, Manna Foods and the Maryland Food Bank. Terry acts as a mentor for Leadership Greater Washington Rising Leaders Program. Terry is a graduate and continuing member of Leadership Montgomery, Inaugural Class of 1990.

Terry resides in Gaithersburg, Maryland, with his wife Karma.  Terry and Karma have two adult children, Kailey and Conor.