Howard has also served the Greater Washington and Prince George's community in a service capacity, as the Chairman of the County Executive’s Advisory Board on Homelessness, Vice Chairman of Prince George’s County Democratic Central Committee, and Founder and Vice President of the Family Crisis Center of Prince George’s County. He is the current  Chair of the Board of Trustees for Prince George's Community College. Howard previously represented Leadership Greater Washington as the organization's former Board Chair and is a proud member of the Class of 1996.

How did you first become involved with Leadership Greater Washington and the Signature Program?

I had several close friends who were members of LGW.  At that time, I was Chief Administrative Officer for Prince George’s County, and because of my love for regionalism, I realized that the Signature Program would be a good fit for me. People may not know this, but I applied to the Class of 1995 before being accepted into the Class of 1996.  It was difficult for me not to be accepted the first time, but my dear friends Artis Hampshire-Cowan (’88) and Susan Hager (’87) encouraged me to keep applying. When I joined LGW and attended orientation, there were 55 people in my class. After 10 mins I realized that those 55 people were also Type A, and I began to understand that I was not going to be in charge, that was an awakening to me.  With the guidance of Artis, I drank the LGW Kool-Aid and got on board.

Share a favorite memory you have of your class. Class of 1996: The Perfect Tenth

When I went through the Signature Program, I met some fabulous people, who have become lifelong friends & comrades. That was the significance of LGW, and that was very important to me, to have the chance to work with people who were invested in improving the quality of life in the region.

I can share one memory I love in particular. During our Environmental Sustainability Day, my class traveled to Great Falls to explore, and after a few minutes outside appreciating nature, our class decided to explore the hospitality of Great Falls instead, and we went out for happy hour as a group We had an understating as a team of people and operated on a similar wavelength.

Tell us about your experience on the LGW Board of Directors

After my Signature Program experience, I joined LGW’s Board of Directors and eventually became Board Chair. Being on the LGW Board was a profoundly humbling experience for me. It meant a lot to have my peers believe in me and believe and that I could lead this organization.

Tell us more about the new LGW Seasoned Leaders project with Board Chair Pinkie Mayfield?

Tapping into LGW’s Seasoned Leaders has been on my mind for about a decade, and I congratulate our current Chair for launching this initiative. Pinkie recruited John Butler (’97), Maxine Baker (’99) and myself to lead this group. Every year, when I receive the LGW Member Directory and browse the list of inactive members, I know many of those individuals, and there must be a way that we can recapture people to restore LGW engagement. I love Leadership Greater Washington, and I have always loved the organization. When I was in the middle of my career, LGW meant a lot more to me in terms of connections and making things happen, and as we are winding down in our careers, our priorities change and were not as focused on networking. I think that the purpose of Seasoned Leaders is to brainstorm opportunities for inactive members to reconnect with the organization and discuss topics that affect senior leaders.

How do you envision the future of the region, what about LGW’s role in that future?

We are connected across Greater Washington in Virginia, and DC and what happens in the other areas also affects what happens in Prince George’s County.  LGW is a forum where you can address these challenges. We’ve had a lot of people in Prince George’s County, especially our elected officials go through the program, and it has been eye-opening for them to get out of Upper Marlboro to see what the region is doing.

How do your efforts and leadership at your current organization impact the future of the Greater Washington region?

What are some keys to staying innovative in your field or some tips for success?

1) Stay focused on objectives and priorities

2) Leadership Greater Washington taught me that I couldn’t do everything myself. You need to take advantage of the support LGW offers. We have such a wealth of talent at LGW and opportunities for advice, mentorship, and personal/professional development.

What is a unique LGW Connection you can share?

I have an excellent relationship with Carol Thompson Cole (’88), President and CEO of Venture Philanthropy Partners. We are working together with her nonprofit and that partnership would not have happened without my connection with Artis. Together we do a lot of work for nonprofits in Prince George’s County.

Please tell us something most people might not know about you.

I don’t think people know that I’m a pretty good cook, and my specialty is Cajun food. Wayne Curry (’87) my friend and confidant, was a big fan of my bread pudding. Another interesting fact about me is, when was growing up, I didn’t think about Public Administration as a profession. I initially wanted to be a mortician. 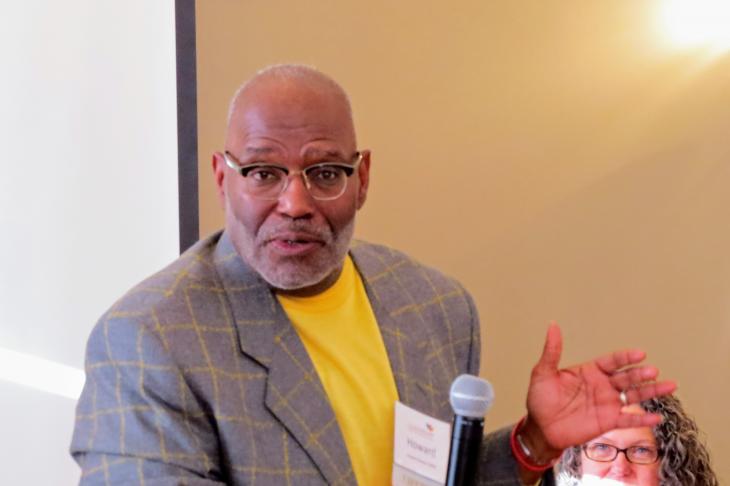