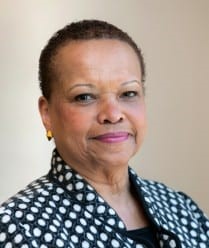 Prior to joining the Foundation, Ms. Mathews served for more than seven years as Executive Director, Community Relations at Kaiser Permanente—Mid-Atlantic States, where she annually managed more than $12 million in charitable assets and oversaw programs that provided charitable health care to more than 5,000 uninsured adults and children, and helped to develop a strategic framework for addressing the issues of healthy eating/active living in the region.

During her career, Ms. Mathews has held a variety of senior-level positions including Vice President for Programs, National AIDS Fund; President, National Bank of Washington Foundation; and Editorial Writer, The Washington Post.

Ms. Mathews received a B.A. from George Washington University, and completed two years of the Masters Program in Urban Planning at Howard University. She is also a graduate of the Advanced Leadership Program at the Kenan-Flagler School of Business at University of North Carolina, Chapel Hill.